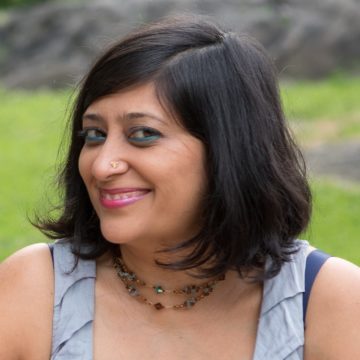 Growing up an immigrant in the U.S. South, Purvi Shah (she/her/hers) experienced being the only brown child in a poor white school – and the impacts of racism, unfair distribution of educational resources, and tracking. As a non-profit consultant, she catalyzes this experience to further transformation towards gender, economic, and racial equity.

For nearly eight years, Purvi served as the executive director of Sakhi for South Asian Women. She won the inaugural SONY South Asian Excellence Award for Social Service for her leadership fighting intimate violence. In 2018, through a participatory change process, she completed a year-long study, Seeding Generations, which spurred an innovative New York City initiative on community-based interventions for people who cause harm and abuse. As an anti-violence advocate, trainer, grassroots researcher, and facilitator committed to opening space for transformation, she delights in movement-making, effective action for change, and furthering equity in community.

Purvi is committed to the arts as a cauldron for strategic change. As a social practice artist, she has led creative expression workshops with survivors (including the 2014 Movement to Power program) and charted surviving to thriving (such as in the 2004 storytelling film What Creates Change?). During the 10th anniversary of 9/11, with Kundiman, she directed Together We Are New York, a community-based poetry project highlighting Asian American voices. Her prize-winning book, Terrain Tracks, plumbs migration and belonging. Her most recent poetry collection, Miracle Marks, explores women, the sacred, and gender & racial equity.