Last week I worked with the Backbone Team of Food Solutions New England to launch the second cohort of the Network Leadership Institute (NLI) at Ohana Camp in Fairlee, Vermont. This initiative has grown out of FSNE’s commitment to cultivating both thought leadership and network leadership “to support the emergence and viability of a New England food system that is a driver of healthy food for all, racial equity, sustainable farming and fishing, and thriving communities.” Another impetus for the NLI was a year spent doing system mapping and analysis that revealed four leverage areas for advancing a just, sustainable and democratically-owned and operated regional food system, including cultivating and connecting leadership (see image below). END_OF_DOCUMENT_TOKEN_TO_BE_REPLACED

Deepening Network Inquiry for Social Change: Who? What? How? 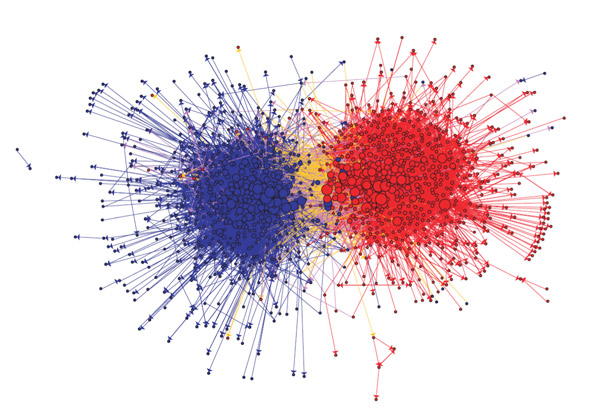 In many rooms where networks are the topic of conversation, a typical question of interest is “Who is connected to whom?” This is an important question, often the focus of social network analysis (SNA), and can lead to important and strategic information about things like hubs, gatekeepers, strong and weak ties, etc. And this is not the full extent of useful inquiry when thinking about social change.

Another important question is, “What is flowing?” That is, what kinds of value are flowing through these connections with respect to information, natural capital, money, cultural expression, etc. This is the focus of value network analysis (VNA) and is important to help understand the overall vitality and health of a network or system. END_OF_DOCUMENT_TOKEN_TO_BE_REPLACED

By his own admission, Dr. Gupta had been engaged in the practice of extracting information from people that served his own or purely academic purposes, without ensuring that the information made it back into the hands and minds of practitioners. He realized that “on efficiency and ethical grounds,” this could not continue. END_OF_DOCUMENT_TOKEN_TO_BE_REPLACED

In 2011, Farm to Plate launched to great excitement and some anxiety as it positioned itself as a cross-sector collaborative network to carry out a strategic plan to double local food production in Vermont in 10 years time, contributing to job and economic growth as well as food access in a state that sees high rates of poverty. Since then, as both Ellen Kahler of the Vermont Sustainable Jobs Fund (the backbone organization for Farm to Plate) observed and remarked through a plenary retrospective, it has managed to find its collaborative footing and grow significantly in numbers (more than 300 organizations strong). And importantly, it has seen real results in terms of direct, indirect and induced job growth resulting in 9,000 new jobs in the agricultural and food sector in Vermont. Furthermore, success is evident in individual members using network goals to inform and align their organizational goals. END_OF_DOCUMENT_TOKEN_TO_BE_REPLACED