An Ecosystem of Resourcing for Racial Equity Culture Change Work

Over the past several years we at IISC have had to opportunity to work with colleagues to go deep over a relatively short period of time (2-3 years) with a few organizations facilitating internal culture change for race equity and inclusion. The intensity of this work has offered up opportunity and a number of important lessons, perhaps first and foremost that it is critical to have in place an ecosystem of support and resources to do this work for everyone involved, facilitators included.

IISC President Kelly Bates wrote wisely in a blog post that the work for racial equity is about undoing as much as it is about doing. We do not simply build new culture or behavior on top of old, especially in situations that are characterized by oppression. Some things must be released, and this letting go does not come easy.

There is power and identity and comfort and resources of various kinds invested in the status quo, including in chronic busyness that does not make space for the work or for much of substance to happen. In some cases, there is a preference for existing discomfort that is familiar and that for some is better than uncertainty and instability (the devil you know). But this is exactly what this work calls for  – stepping boldly, and together, into the unknown and unknowing and being open to changing who we think we are, how we relate to ourselves and one another.

This can get quite fraught, opening up hard feelings, mistrust, suspicion and trauma. The diagram above from DismantlingRacism.org highlights the “liminal” space in racial equity processes that groups enter when they move beyond the familiar, including “familiar dysfunction,” to unfamiliar dysfunction. This phase is described in the following way:

The stage of “not knowing,” [is] a place where many experience frustration and/or fear. Many if not most people want the process to offer clarity and quick fixes; when the process does not, both POC and white people give into the tendency to identify people and actions as “right” or “wrong.” Some people in the organization move into positions of high righteousness, believing that race equity is based in “one right way” of doing things; energy goes into identifying who or what is “right” and who or what is “wrong.” People can feel very unsettled because this righteous judgment can either lead to significant self-doubt and/or a desire for the organization to address personal ego needs. At the same time, in the middle of this “not knowing,” relationships may begin to subtly shift as some individuals within the organization work to negotiate conflict with heightened personal awareness and increased accountability to the mission. In addition, the organization as a whole begins to recognize ways in which racism is tending to reproduce itself and attempts are being made to address those.

Here, while ideally we would hope to be able to lean on one another, it is the reality that other supports are going to be necessary, and beyond what external change facilitators and coaches are able to provide. On the way to achieving more relational trust with and commitment to one another, there are a variety of handrails that can be helpful.

For one of our engagements, my colleague Jen Willsea put together the diagram below to sketch out some of the systemic supports that can be useful for organizations going through race equity change work.

A few notes about what appears in the diagram:

And we certainly welcome additions! What have you found to be helpful, if not crucial, to the work of race equity culture change?

We were heartened to see and hear the many conversations about racial equity during the main conference proceedings, and noted good and challenging questions and exploration about the fit between the Collective Impact model, such as it has been formally presented and understood, and community organizing and power building work. These conversations continued in some form or fashion during our session. END_OF_DOCUMENT_TOKEN_TO_BE_REPLACED 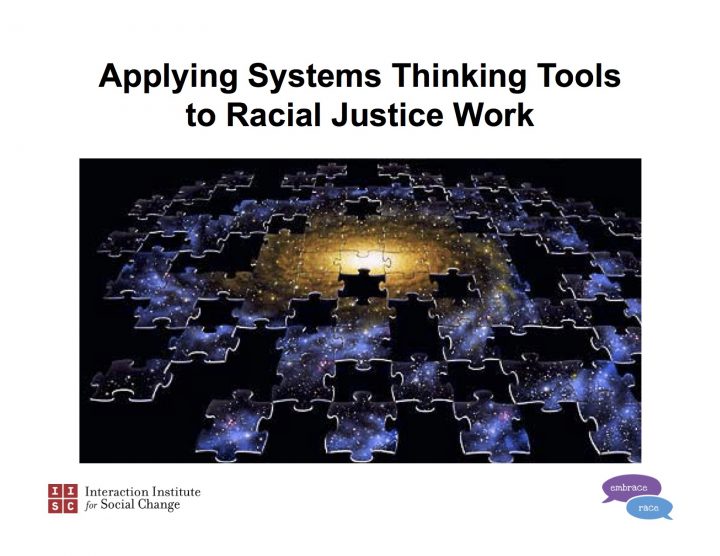 In our session in Atlanta, we spent some time talking about and exploring the “thinking” side of systems thinking. We presented a few systems thinking sayings and quotes from different writers and practitioners, and invited participants to read and reflect on them and talk with others about the ones that most caught their attention. A specific request was to pay to attention to how the words impacted their thinking and perspectives. There were, in just the span of about 10-15 minutes, some remarkable insights reported. And so I invite you to do the same, to share any impacts, and also to add your own favorite systems thinking sayings. END_OF_DOCUMENT_TOKEN_TO_BE_REPLACED

In some cases this is because they have not paused long enough, if at all, to consider the underlying question their efforts are trying to solve (risking “active laziness” which I blogged about a couple of weeks ago).  Or, as my colleague Cynthia Silva Parker has said, they are “solving for solution,” essentially promoting and/or fighting over their own preferred approaches.  And so they continue to offer the same old, ineffective and outdated, approaches or products.  This is especially problematic in a time of such change and flux, when we can’t fall back reliably on what we already know. END_OF_DOCUMENT_TOKEN_TO_BE_REPLACED

My friend Adam Pattantyus recently reminded me of the concept of “active laziness”, attributed specifically to the writings of Sogyal Rinpoche. This reminder came at a very opportune moment. It is no secret that there is, at least in a number of circles in which we at IISC operate, a burgeoning culture of busy-ness. Many people seem increasingly pressed for time, and move between the temporal equivalent of sound bites throughout their days. The ensuing “frenzy” and exhaustion, while perhaps seen as necessary (or by some as a status symbol), is also being called out for its dysfunctional nature, including how it detracts from efforts to create positive and lasting social change. This is what Rinpoche calls “active laziness,” the compulsive cramming of our lives with activity that leaves no time to confront “real issues.” END_OF_DOCUMENT_TOKEN_TO_BE_REPLACED

In a number of the social change networks that I am supporting there is very active and interesting conversation, and experimentation, going on around what I would call the process-action tension.  As I have written elsewhere, I see this as a bit of a false and often unhelpful dichotomy, and I have certainly seen and been part of networks that have gotten bogged down in some version of analysis paralysis and never-ending consensus building. Increasingly there is a leaning towards getting out there sooner than later and trying things, learning from experiments and actions, readjusting, etc., which is all well and good.  At the same time, I see it as part of my role to raise questions about how the embrace of “do-acracy” might have unintended consequences around long-term alignment as well as sustained and truly systemic impact. END_OF_DOCUMENT_TOKEN_TO_BE_REPLACED

I am just coming from a convening of the Northern New England Networks Community of Practice in  Crawford Notch, New Hampshire.  The theme of the gathering was “Power and Networks,” and very timely in that a few network building initiatives with which I am working are reaching a fever pitch in terms of working out issues of power and privilege.  Borrowing from something my IISC colleague Cynthia Silva Parker has said in the past, while power is always at the table, now it’s on the table!  And I wanted to share some of the gleanings from the overall session. END_OF_DOCUMENT_TOKEN_TO_BE_REPLACED