If You Till It, They Will Come 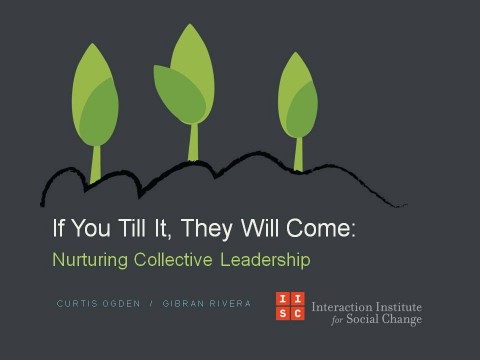 On the cusp of the Martin Luther King Jr. day of remembrance and celebration, IISC is gearing up to lead a webinar on the day after the Monday holiday focused on a very relevant topic – collective leadership. Much is being made of the Occupy Movement and its potential for showing us a new way to lead (we would call it leader-full, not leader-less). Prior to this important civic groundswell, many have been looking at how to create the conditions for emergent and collaborative leadership to move us in more just and life-affirming directions.  Given the complexity of the issues we face and the diversity of perspectives in our various systems, it has been recognized that we cannot rely on individual, expert, or command-and-control leadership to move us forward. We must unleash more robust and adaptive collective intelligence. If this conversation interests you, come join Gibran Rivera and me as we explore stories of and practices for creating the conditions to unleash leader-full momentum that embodies and leads to the social change we seek. More information about this free opportunity can be found here.

Three years ago I had the privilege of helping to design and facilitate a convening of people in Maine interested in the power of networks for social change. The day featured many interesting presenters, including Michael Edwards who gave a provocative concluding talk entitled “Love and Networking.” His words have been coming back to mind of late, as I do work in different systems where networks are all the rage and we struggle to balance the more formal structural elements with the animating consciousness and connectivity that are the transformational juice. During this Labor Day holiday, I invite you to consider Michael’s inspiring words, excerpted from the fuller presentation, and add your own thoughts and reactions: END_OF_DOCUMENT_TOKEN_TO_BE_REPLACED

Martin Luther King has been on my mind over the last few days.  I’ve been contemplating his prophetic voice, and how every age needs its prophets.  I’ve been contemplating the relationship between his belief that “the vision of where we’re going is the reality we have to claim,” Joseph Campbell’s work on the power of myth, and @EmergentCulture’s recent tweet proposing that “we need a new myth for our time, a story that will serve us as we encounter a time period unlike any before.”  It is all coming together in ways I’m not fully ready to define. END_OF_DOCUMENT_TOKEN_TO_BE_REPLACED