Getting With the Flows: “Net Work” As Change

For a number of years now I have been digging into network approaches to social change, including supporting collaborative network formation and development at national, regional, state and local levels around a number of issues, from food insecurity to health inequity to environmental conservation to economic decline and stagnation. While there have been promising advances made in many spaces and places to build trust and connection across various lines of difference (geographic, sectoral, cultural, ethnic, racial) and also to achieve alignment around shared goals and shared identity, significant change has been slow to come and while I know it is important to be realistic about time, I keep feeling that there is a missing link between the work of network development and what is often held up as the goal of “system change.”

I will admit that increasingly I find the stated goal of “system change” a bit hollow and too big, too abstract. Change from what to what? For the sake of what and whom? Increasingly I am more interested in looking at the work of system change as being about working with living systems (neighborhoods, communities, organizations, economies, democracies, etc.) to be equitable, salutogenic (health-promoting) and regenerative (self-renewing). Arguably many of the systems that change agents are focused on are in a state of crisis and/or impending collapse, putting significant portions of the human population, if not the entire species, at risk.  And, of course, the extent to which many of these systems have been “functional,” it has often been at the expense of certain people and the planet (parts or the entirety thereof).

As I hear more talk about the need to come together, connect and collaborate across boundaries (build networks), I keep wanting the conversation to get to another step. Instead of saying that we are here to build networks to work on systems, I want more people to realize that the networks that we are trying to create and that already exist are part and parcel of those systems. That is, neighborhoods, communities, economies, political and health systems, are also networks, or networks of networks – patterns of connection and of flow. They are characterized not just by elements (including people) that are in relationship (that we might see in a typical network map) but also by the resources that move through those channels of relationship (money, information, nutrients, etc.). This realization takes us into the realm of what are called the “energy network sciences” and the idea that evolving patterns and the quality of connection and flow changes and/or creates new systemic possibilities.

“New paths of flow are needed for new patterns of organization that are resilient.”

My friend and mentor Sally J. Goerner, quoted above and throughout the rest of this post, recently published a paper entitled “The Collapse of Oligarchic Capitalism and the Rise of Regenerative Learning: How the science of energy systems clarifies what’s happening today and what comes next.” In this paper she builds on her previous and robust work to illustrate how “flow networks” have a lot to say about our current political, economic and climate disruptions and crises.

She begins by reframing our view of evolution from one that is mechanical and accidental to one that is dynamic and quite intelligent. As she writes – “The new logic of life comes most clearly from the new story of growth, development and evolution emerging from an energy-driven process called self-organization.” Self-organization, a phenomenon that is recognized and valued by many network weavers, occurs through the ongoing process of life meeting life and creating new patterns of vitality. Sally writes –

“Instead of improbable accidents in a universe running downhill, we are probable products of energy-flow and binding forces … that connect us in an all-embracing ever-evolving web moving inexorably toward increasing intelligence, complexity, integration and balance.”

In order for this process of complex evolution to occur, there is a need to keep energy flowing and cycling and recycling through an “ever-growing meshwork of connective tissue” so that new patterns of organization can form that are resilient in an ever-changing environment. This flowing energy can exist in the form of information, learning, money, and other crucial resources. When this flow is stunted or fails to happen, certain parts of the system in question can be put at risk, and over time, especially if energy makes it to only a small part of the overall system (through disconnection, blockage, hoarding, extraction) the whole system faces the prospect of collapse. What this means is that the system loses its capacity to regenerate.

“Regenerative systems maintain their existence by constantly channeling critical flows back into nourishing their internal processes and organization and other forms of revitalization.”

Sally spends the bulk of her paper showing how non-regenerative patterns apply to the logic and playing out in the US and globally of economic neoliberalism and oligarchic capitalism. “Neoliberal economies under-invest in human capacities, encourage extractive and speculative practices, promote concentration over circulation; and extol corporate gigantism instead of proper balance.” This is all exacerbated by the accompanying dynamic of the concentration of significant influential decision-making power in fewer and fewer hands (elites) that are self-serving. And this makes the entire system (economy, political system, organization, community) unstable because it violates the rules of “regenerative vitality” – it is less “intelligent” in its ability to respond through diverse sensors and actors to environmental signals.

The counter to where we are and are heading is to be found, in part, through bringing an energy or flow networks perspective which encourages us to keep evolving “constructive, synergistic human networks, linked by mutual benefits, energized by common-cause, and fueled by the robust circulation” of energy/resources. This means embracing a different set if values than those offered by neoliberalism, for example – uplifting a full accounting of human and planetary “externalities” (oppression, theft, pollution, ecological degradation); the care, inclusion and feeding of entire and diverse networks of interconnected individuals, organizations, businesses, communities, cities, governments and the biosphere; and a commitment to robust social learning across all kinds of difference.

This is where I want to take the conversation with more and more social change agents and network weavers going forward. Let’s not focus simply on the structural form of our networks and net work. Let’s focus on what is moving and what facilitates flow through those connections; from where and from whom, to where and to whom; as well as what and who flow supports in terms of resilience, thriving, as well as adaptive and regenerative capacity.

I just finished reading The New Science of Sustainability:Building a Foundation for Great Change, which added depth and nuance to my understanding of the importance of thinking and working in networked ways to create social change. Lead author Sally J. Goerner isScience Advisor to the Capital Institute and lectures worldwide on how the science of “energy networks” can provide measures and an overall narrative for supporting social, economic, and ecological sustainability. END_OF_DOCUMENT_TOKEN_TO_BE_REPLACED 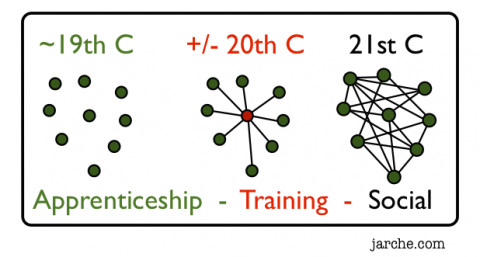 But consider how our understanding of how the world works is shifting through our ability to see connections, appreciate the social creation of knowledge and grasp the emergent nature of change. Seeing reality through a living systems lens helps us to understand ideas as seeds, expression as sowing, interaction as fertilizer and social networks as the metabolic infrastructure to bring new things fully to fruition. END_OF_DOCUMENT_TOKEN_TO_BE_REPLACED