“In my state, treaties still continue to be broken with Native American communities, the most recent agreement being broken in 2015. State programs aimed to “help” are rooted in white supremacist ideologies. I think of Audrey Lorde when she declared, “For the master’s tools will never dismantle the master’s house. They may allow us to temporarily beat him at his own game, but they will never enable us to bring about genuine change. Racism and homophobia are real conditions of all our lives in this place and time. I urge each one of us here to reach down into that deep place of knowledge inside herself and touch that terror and loathing of any difference that lives here. See whose face it wears. Then the personal as the political can begin to illuminate all our choices.”
END_OF_DOCUMENT_TOKEN_TO_BE_REPLACED

END_OF_DOCUMENT_TOKEN_TO_BE_REPLACED 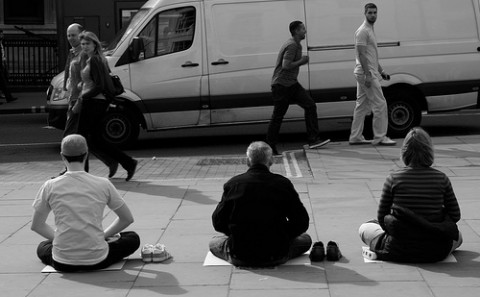 Sometimes it takes science a little time to catch up with the world’s wisdom traditions.  Recent research findings from a couple of Harvard psychologists, Matthew Killingsworth and Daniel Gilbert, confirm what meditation and mindfulness practitioners have long known – our ability to stay focused in the present has a strong correlation with contentment.  Using data collected from a specially designed iPhone application, the researchers report that people spend nearly 47 percent of their waking hours thinking about something other than what’s happening in front of them.  Furthermore, they find that, “Mind-wandering is an excellent predictor of people’s happiness.  How often our minds leave the present, and where they tend to go, is a better predictor of our happiness than the activities in which we are engaged.”  You still with me? END_OF_DOCUMENT_TOKEN_TO_BE_REPLACED