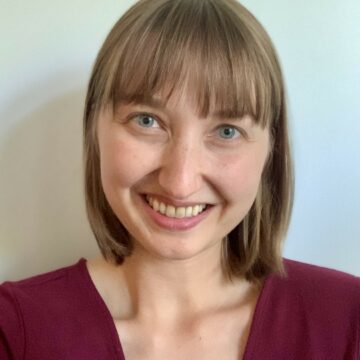 Emily Eckland (she/her) is committed to imagining and building radically just new worlds. As a white cishet woman with class privilege, she is indebted to Black movement organizers in Atlanta and New Orleans for her understanding of the interconnected violence of race, class, gender, and sexuality, and the importance of deep introspective and interpersonal work with white caucus groups.

Emily is passionate about building embodied white antiracist culture and spiritual practice. She is currently pursuing an MA in American Studies at the University of Massachusetts, Boston, where she is focused on the cultural performance of whiteness in twentieth and twenty-first century film, fiction, and television. Emily also holds a BA in Business Administration from Emory University, where she became passionate about nonprofit community development, a field where she worked for five years in historically Black neighborhoods in New Orleans. She enjoys exploring new cities, towns, restaurants, and food trucks, practicing yoga and meditation, and learning new ways to practice self-love, vulnerability, and compassion.