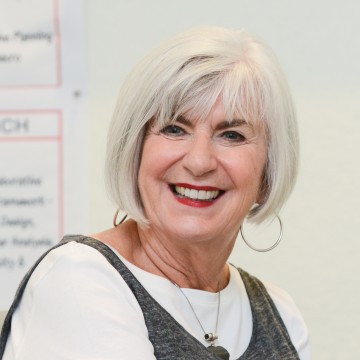 Marianne Hughes was the first executive director of the Interaction Institute for Social Change (IISC) and led the organization for nearly twenty years. She is now working with IISC as a senior consultant while also maintaining an independent consulting practice.

Marianne brings to this work a combination of her years of experience as IISC’s executive director; expertise in the design and facilitation of systems change, network building, leadership development, public policy advocacy and community organizing; a devotion to social justice; and deep faith in the human capacity for goodness to further the work of global transformation.

Marianne’s professional commitment to social change began in 1966, during an early life-directing experience as one of the original VISTA Volunteers. She followed this with years of community organizing and advocacy work. In the decade prior to becoming executive director at IISC, Marianne worked at Regina Villa Associates, a public affairs firm that specializes in public policy and political consulting, public interest lobbying and public participation. In 1993, Marianne was hired by Interaction Associates to launch IISC as a nonprofit partner organization to work in the social and public sectors as well as local communities. During her tenure with IISC, the organization grew from a start-up with a staff of two to an organization with offices in Boston and Belfast and over 30 staff and affiliate consultants and trainers serving hundreds of clients annually across the country and world.

While leading IISC as executive director, Marianne worked with change makers across the world in their social transformation efforts by providing consulting in strategy development and organizational change; the design and facilitation of multi-stakeholder collaborative planning and network building initiatives as well as learning events and retreats. Marianne also provided capacity building trainings in the skills and tools of collaboration, transformational leadership development, and skillful and effective facilitation.

In all these years of working for social change and seeing both the enormous progress we have made as well as noting the great distance we still need to travel to achieve our shared vision of a more just, healthy sustainable world, Marianne continues to be inspired on the journey by the words of Pierre Teilhard de Chardin:

Someday, after mastering the winds, the waves, the tides and gravity, we shall harness for God the energies of love, and then, for the second time in the history of the world, man will have discovered fire.