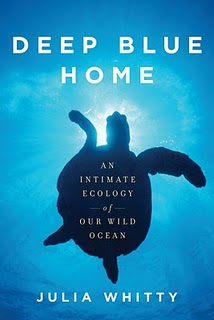 My wife and I have been enjoying spending some of our evenings reading to one another from Julia Whitty’s book Deep Blue Home: An Intimate Ecology of Our Wild Ocean.  Whitty, a scientist, documentary filmmaker and correspondent, writes about her years of exploration and discovery of the World Ocean, the three dimensional current circling the globe that profoundly controls the planet’s climate and has a tremendous impact on all life.   In one chapter, Whitty references the Census of Marine Life, an amazing 10 year collaboration of over 2,700 scientists from more than 80 nations to assess the diversity, distribution, and abundance of marine life.

As awe-inspiring as the undertaking itself has been, the results are simply mind-blowing and speak to the insights and intelligence available through thoughtful collaboration, including a deepening understanding of our own place in the larger scheme and a nudge to get us off center stage.  Here is how Whitty captures some of it:

“The Census is a veritable factory of revelations: species surviving below 2,300 feet of ice off Antarctica, a living shrimp that had been believed extinct for 50 million years; pairs of mated seabirds flying 44,000-mile figure-eight loops in the two hundred days between nesting seasons; a fish school 20 million strong, covering an area the size of Manhattan, swimming off New Jersey. The quest reveals a startling truth about our planet: that life thrives even in ‘lifeless’ conditions, harvesting energy from sources we thought were ours alone – radioactive uranium, hydrogen, hydrogen sulfide, and methane – in places no one thought to look before, including between rock crystals.”

“Along with surprises came extremes. Census scientists, for example, uncovered the deepest, hottest, most northerly and most southerly hydrothermal “black smoker” vents known to science, found the world’s largest biotic ecosystem created by a single type of organism, and traveled along as a sooty shearwater chased endless summer on its 64,000-kilometer (40,000-mile) pole-to-pole journey. Scientists also reported the existence of everything from a giant squid to 38,000 different kinds of bacteria in a liter of seawater. The implications of these discoveries reveal the extent of the unknown.”

Clearly we have only scratched the surface in so many respects. Here’s to ever widening circles of collaboration.