I migrated to the United States in 1998 via the F1 visa application process. This process allows a family member who is a citizen to apply for immediate relatives to become permanent residents. The premise of this process is one of family reunification and the applicant (citizen) must be a resident in the United States during the greater part of the application period. In my case, my mother was the applicant so this meant that during the better part of two years while I was in high school my mother had to live in the United States while my brother and I lived in Trinidad. Being separated wasn’t the only thing we all/each sacrificed; there are several ramifications of this process that go along with the privileges of becoming a US citizen. And, I don’t make light of those privileges, especially as my particular immigration story is indeed one of great privilege relative to the experiences of those who are currently under direct attack by the federal government and by the right wing media. (I say “currently” not to say that undocumented immigrants were not under attack by previous administrations, but to say that I do not know when naturalized citizens and permanent residents will be under direct attack, as well. We’ve already seen it begin with the “Muslim Ban.”) But this reflection isn’t about the politics of migration, although we would do well to continue to reflect deeply on that. Rather, I am contemplating the state of my heart as an immigrant.

One thing I have noticed over the time that I have been in the US is that my heart is always torn in two. As someone who straddles two different ways of being, two different nationalities, two different ways of looking at the world, it has been a doozy for reconciling identity. On the one hand, this is stressful, but on the other, like so many other third culture people I know, it is actually a great super power. I can see the world from different perspectives and can necessarily integrate them in a way that produces something better than the sum of the parts. Immigrants have super powers, y’all. We can take the best of many different worlds and create beautiful, delicious, vibrant expressions of what liberatory futures look like.

Today, one of the experiences that I’m yearning for that comes from my culture is the annual ritual of liberation we call Jouvay or J’ouvert. I won’t go into all the history of colonialism and slavery that gave rise to this tradition, but I will say that in the modern era it is a great spiritual cleansing and a public ritual of liberation that takes over the streets of Port of Spain during the climactic second-to-last morning of the Carnival season. (This year it will take place in mid-February.) Carnival itself is a letting go, a festival of liberation based on the pre-Lenten Catholic festivals of the French and Spanish when they gave one last hurrah to the vices and proclivities of the flesh before engaging in the 40-day long period of fasting beginning on Ash Wednesday. During our Jouvay, participants adorn themselves in handmade costumes, and in mud, oil, paint, and cocoa or baby powder, and they chip through the streets in great abandon under cover of darkness in the early hours of the morning until just after sunrise. Jouvay begins at 2:00 a.m. and ends around 7:00 a.m.! I am watching friends in Trinidad prepare for this day by gathering mud, by gathering the friends they want to be with on the road, and by beating the drum of anticipation for the ritual that allows for release and rebirth.

I crave this ritual or any other ritual of liberation that allows us to let go, to be free, without trappings and accoutrement, without fear. To experience what it is like to just have love, and music, and dance, and laughter, and spirit…and rum. I am craving stories of the feeling of liberation here in the US. I am craving a liberation praxis. So often when we are asked about liberation as activists, we describe the struggle, the fight, the organizing, the process towards liberation. But I want to know…what elements of liberation are people experiencing right now even in the midst of the struggle? Even if it is for just a moment or an hour, when do you feel free? What are the experiences we want to expand in our liberatory future because they make us feel a little bit free now? 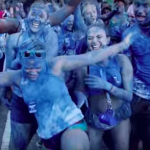 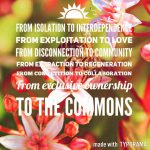 I’ve been observing the role of Mercury’s retrograde on my systems. Paying attention to my thoughts and feelings, the shifts and entrenchments. Lately I’ve been feeling a bit stuck. Or to use another metaphor, a bit ungrounded. It’s easy given the flow of information, the speed of communication, and the function of social media to feel pulled in many different directions. In addition, as a consultant, balancing the priorities of several clients at a time can often make it difficult to focus. When this happens I try to strengthen the consistency of my meditation practice and focus on my personal and professional goals to provide a guidepost for my actions.

I realized as I sat in meditation the past few mornings that my sense of purpose had been unattended to for a while. No wonder I felt scattered or ungrounded. Having a clear sense of purpose, an understanding of what I feel committed to and associated goals provides an important filter or straight line through all of the choices I face daily and helps to ground and retain focus. So I’ve been reflecting on purpose, leaning in to what is resonating for me in my conversations with colleagues and what is I am feeling called to in the movement. I’ve also been thinking about what threads together the work I am doing at IISC and my cultural work with Intelligent Mischief.

My commitment, or purpose, is to engage in transformation of myself and others towards liberation. This work aligns with what I do at IISC by supporting the self-empowerment of transformational leaders and by creating possibility for liberatory organizations that can really bring about the social transformation…that world, that  speaks of, that “on a quiet day we can hear her breathing.” It also aligns with my work at Intelligent Mischief by cultivating a cultural shift that makes this transformation irresistible through the use of popular culture.

I reflected on what principles underscore this transformation for me…principles we can embody now at all levels to move us in the direction of liberation.

I see this transformation being underscored by a shift from isolation to interdependence, from exploitation to love, from extraction to regeneration & healing, from disconnection to community, from competition to collaboration, from exclusive ownership to the commons, from othering to belonging…and there are certainly many more.

What can be our role at IISC in supporting leaders to develop practices that embody this transformation? In building structures that prefigure this transformation? And what is the transition in alignment with those principles that we ourselves must make as an organization?