Although we practiced this way of giving for just three days, it had a profound and (hopefully) lasting effect on me. It allowed me to gain a deeper understanding of the meaning of the phrase ‘Love is a verb’. The experience revealed that optimally love involves both giving and receiving. I learned that there are ways in which it is easy to give and that for those of us who are involved in social justice endeavors, it can often be quite hard to receive. The practice encouraged us to be comfortable with hearing others’ words of appreciation and to be willing to be taken care of.

During the course of the exercise it occurred to me that there are a few socially sanctioned ways of showing love. These ways are often gendered, based in the notion/prioritization of romantic love. They are often material and commercialized, putting profound social pressure on us to spend increasing amounts of money, consuming large amounts of products whose value is often questionable. The impact of this consumption on human well being and the environment is often unsustainable. Sometimes the ways we think we should show love are not very nourishing.

The Secret Angel practice we learned last week instead asked us to organize our intentions to focus on acts of love that are simple, yet profound and that occur in the least likely of relational environments, at work. I found that when I focused on showing love and appreciation to the person I chose, I began to think about them all the time. I woke up thinking about how I could make each day better for them. At first I was focused on appreciating my colleague in ways that were comfortable for me, but after day two I began wondering what she really needed, what I could do for her that could actually make her life easier. It went from being about me, to being about her.

When I focused on practicing love this way I found that my actual capacity for love grew. After the second day I felt an urge to start showing appreciation for other people in the office as well as in other parts of my life. I realized that remarkably, love does not diminish the more we give it, instead it grows and amplifies.

By the end of the three days I was wondering how we could expand this practice both internally here at IISC as well as how we could spread it in the world where we so badly need it. How could we increase our practice of love as new ways of being in our relationships and in our communities and networks. What would it be like if we showed up as angels for others we came into contact with or awareness of? How might the world be different if we focused our energies on forging relationships based on love at all levels of society?

During this same week, members of the infamous Westboro Baptist Church publicized their plan to protest at the funeral of Christopher Andrew Leinonen, a victim of the Pulse nightclub shooting in Orlando on June 12th. As they assumed their usual position of hatred and bigotry, a procession of members of the city’s Shakespeare theater stood in front of them wearing white gowns and angel wings. This simple, angelic act of love, protected Christopher’s loved ones from the hatred and bigotry behind.

The theater’s artistic director said: “Angel wings are meant as a loving support to the fallen, not to create more anger or violence.” 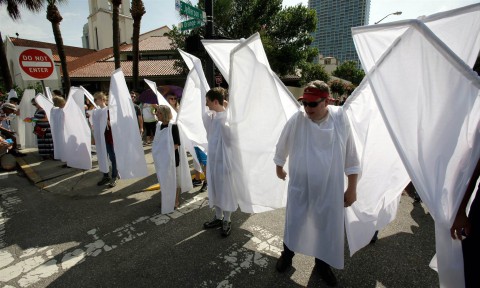 In this time of great turmoil we face a beautiful challenge. A challenge to find the simple acts of love that we can perform to protect, support, and show gratitude for others; to lift their burdens a bit and provide some much needed relief.

In this time of great turmoil, we all need angels.