Earlier this year I had the opportunity to sit in on a session in Detroit with Adrienne Maree Brown, writer, editor, facilitator and consultant to social movement organizations. Adrienne’s offering was on the potential of “radical science fiction” to realize empowering visions of a just and sustainable future. After sharing some of her own writing, she encouraged participants to play with a sense of imagination grounded in realistic projections of current social and environmental conditions and trends.

For example, while acknowledging the reality of ecosystem-depleting capitalism, mass incarceration and climate change, we were invited to think about reality-based characters with “special powers” who might help yield more desirable means and ends. The intent was, as Adrienne explains, “to create innovative ways of understanding the world around us, paint visions of new worlds that could be, and teach us new ways of interacting with one another.” It is this impulse that led her and co-editor Walidah Imarisha to organize Octavia’s Brood (in honor of science fiction writer Octavia E. Butler), “the first book to explore deeply the connections between … ‘visionary fiction,” and movements for social change through the vehicle of short stories.” The collection features a number of short stories by artists and activists.

Since that session, I’ve continued thinking about the practice of creatively reimagining futures that hover between dystopian (depressing, undesirable) and utopian (impossible, also undesirable) views. Then last week an article appeared in Nautilus entitled “An Astro-Biologist Asks a Sci-Fi Novelist How to Survive the Anthropocene,” in which astrobiologist David Grinspoon interviews Kim Stanley Robinson, science fiction and political novelist. Robinson’s recent book, 2312, “permits humans to survive near-extinction and populate the solar system over the course of 300 years.” In their discussion, Grinspoon asks Robinson what he sees as being keys to humanity getting through mounting social and environmental challenges. His answer struck me as sensible and breaks down more or less into the following:

Grinspoon and Robinson also talk briefly about the Fermi Paradox, which points to the contradiction between the high probability of intelligent life existing beyond our planet and the fact that we have yet to see any confirmed evidence. One explanation offered for the paradox is that intelligent civilizations tend to destroy themselves, done in by the technologies and practices that contribute (at least for some time) to their so-called “advancement.” This suggestion should have us taking a hard look in the mirror and the facts, then, perhaps dusting off our visionary imaginations to push beyond the strictures of current thinking that seem to have us on a precarious path.

From Octavia Butler’s “Earthseed: The Books of the Living,”Parable of the Sower. 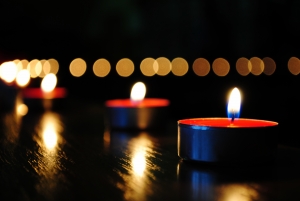