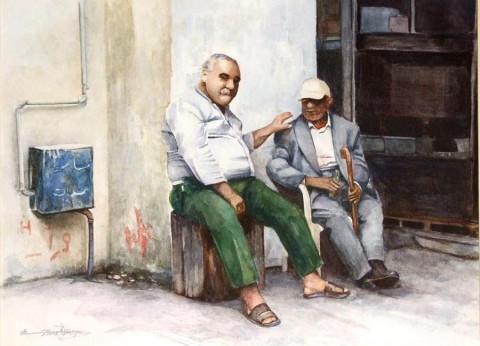 “What are you wearing?” I asked.

“What?” he responded. He surveyed his chest. “This?” He then gripped a thin gold chain on his neck.

“Oh, I don’t know. Nothing,” he responded. “It just matched my shoes.”

“Yeah. Born and raised in the Bronx.”

“Where are you from?” he asked.

“Hey, you know,” I shouted over the groan of the zipping train, “… I actually do know what your hat means. I was just wondering if you did.”

“I don’t know … somewhere here on the Upper West Side … at some shop.”

“I see,” I said. “… You know—I didn’t know this coming out here—but there are actually a lot of Native Americans who live in New York City.”

“I didn’t know that,” he said as he eyed me, probably wondering where I, the stranger, was headed with this random chat.

“Well, Mexicans are Indians in a way too, right?” he said.

“Damn right, man!” I bellowed with an obvious tincture of Brown pride.

PAUSE FOR A LONG BLARE OF THE TRAIN’S WHISTLE AS IT PULLS TO A HARD STOP INTO COLUMBUS CIRCLE AT 59TH AND BROADWAY.

“So I guess my hat offends you then, huh?” he said as a funnel of railriders loaded onto the railcar. One man had on a crisp, blue, fitted suit and was scanning a wet Wall Street Journal; another had somehow managed to position a muddy mountain bike next to him.

“Why do you ask?” I responded.

“Because you brought it up,” he shouted.

“It offends me, right, but I know why you’re wearing it.”

“Because you were taught by someone somewhere that it was OK to wear things like that,” I said.

“Look, we just left Columbus Circle, right?” I began. “And there’s that massive monument in the middle of the circle to a man who was inarguably guilty of genocide. …”

TWO HARD WHISTLES BLARE ONCE AGAIN FROM THE METAL TUBE NOW TRAVELING AT WHAT FELT LIKE 60 MPH.

“It is what it is because we let it be what it is,” I said. “I’m not offended that you’re wearing that hat, man. I’m offended that we live in a country where people believe it’s all right to make and sell things like that. It’s just not.”

Suddenly we both realized a couple sitting immediately across from us hadn’t said a word to each other since they boarded at Columbus Circle. They were obviously eavesdropping, but they feigned like they were on their phones.

“I think they’re actually listening to us,” I said.

“You know they are. There’s no service in subways,” he said.

“Where are you getting off?” I asked.

“Christopher Street. I need to go deeper into the Village,” I said. “I’ve got a meeting with some folks. We’ll have sushi and talk business.”

PAUSE FOR AN EXPLOSION OF LAUGHTER FROM A CROWD OF YOUNG MEN GRIPPING DINGY SUBWAY POLES.

“You don’t care that I’m recording this, right?”

“Yeah, right here.” I pulled out my tape recorder from my chest pocket. The red light glistened like the eye of white lab rat.

“I’m a journalist, man. I keep this thing on when I’m on the train. I hear the wildest stories on here—some better than any book I’ve ever read.”

“That is a hyperbole,” I chuckled.

“Yeah. You, too,” he said. “Careful in Brooklyn. Don’t look Denver, if you can. Look Brooklyn.”

“I was actually thinking of growing a beard,” I replied. “And then maybe I’ll start eating vegan and roll up my jeans at the ankles. I’ve already got the black-rimmed glasses.”

The train had come to a full stop at 14th Street.

He just smiled. So did I.

The doors slipped shut and the train took off again. The roar of the machine echoed throughout its guts.

Simon Moya-Smith, Oglala Lakota, is a Master of Arts graduate from Columbia University School of Journalism in New York City.