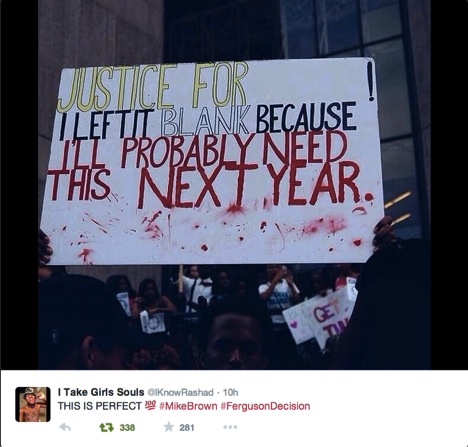 I wish we would only need that sign in another year. It’s crazy to me that it’s already relevant, and that its relevance stretches far into the past as well. In just the past few days alone, Tamir Rice, Tanisha Anderson, and Akai Gurley all died at the hands of police. Twelve-year old Tamir Rice was shot by police while playing with a BB gun in a Cleveland park. Tanisha Anderson died in a police “take down” when she resisted being taken in for mental health services, though her family called for an ambulance, not police. Akai Gurley was killed by a rookie cop in a dark hallway in the Pink Houses in Brooklyn. Gurley was described by Police Commissioner Bratton as a “total innocent” who was shot in an “accident.” His death has already been ruled a homicide.

My colleague Mistinguette Smith has lifted up a crucial question. Have we, the elders, failed our young people? Have we said too little, settled for too little, agitated too little in the last generation? Have we focused too little on results that matter?

One place where we have not yet succeeded is in creating a unified human community in this country where every life matters; a community where the killing of black mothers’ sons is as important as the killing of white mothers’ sons, as the anthem Ella’s Song reminds us. For those who argue whether we will get to that day via changing hearts and minds or via changes to systems and structures, I say it’s a matter of doing it all in parallel, while cultivating the kind of self-love that stands up to oppression. Changing systems without changing hearts and minds has not gotten us there. Neither has working on hearts and minds without working on systems and structures.

Consider the number of politicians, pastors, and others calling for “peaceful demonstrations” by those assembling in the name of justice for Michael Brown. There’s nothing wrong with that, and I agree. But there were no similar calls for peace on the part of Darren Wilson’ supporters in the event that Wilson was indicted. In one of the many pleas for peaceful demonstrations issued on the day of the decision, the clear divisions of “us” and “them” were especially evident. One public official* stated that the priority following the announcement of the grand jury verdict was for “us” (law enforcement, and by implication, the government more generally) to protect “you” and “property” from “people who disagree with you.” It was clearly addressing white people who were afraid of the anger that has been mounting and was likely to spill over as the “you” that would be protected. All of the preparations were focused on demonstrators calling for justice for Michael. I don’t recall anything about protecting the black community from the violent threats against made by KKK members in the event that the grand jury chose to indict Darren Wilson.

(*I have been searching all morning for the citation for this quote and can’t find it, but I did hear it myself as part of the pre-announcement coverage.)