As referenced in a previous post, the Food Solutions New England 21 Day Racial Equity Habit Building Challenge wrapped up about a month ago. This was the fourth offering of the Challenge, which was a remixed and enhanced virtual network form of an exercise created by Dr. Eddie Moore (founder of the Privilege Institute) and Debbie Irving (author of Waking Up White). A small design team of which I am a part originally saw the potential of using the Challenge to invite more widespread conversation about the connection between race, racism and sustainable food systems and ultimately greater action for racial justice. No one presumed that the Challenge in and of itself would be sufficient, but rather saw it as a way of creating “network effects” around the work that many are already doing in our region.

And there is evidence that there have been impacts happening as a result. Participation in the Challenge has grown from 200 to 3,000 from 2015 to 2018. This year the Challenge was launched, in a sense, at the Wallace Center’s National Good Food Network Conference in Albuquerque, New Mexico (gratitude to the Center’s staff for the invitation to do so!). We have heard stories since the beginning that various groups in the region and increasingly around the country have participated in the Challenge and invited others to do so, including Farm to Institution New England, Iowa State University Extension, The Interdependence Project, and The Fellowship of Intentional Community. 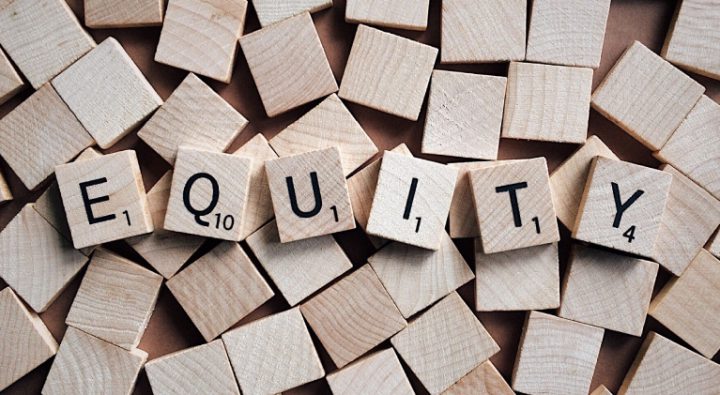 We have also learned of groups hosting organizational and community reflection sessions, including a number of schools and colleges. This year, the Tufts University Friedman School invited faculty and students to participate. Members of the Friedman Justice League shared an e-newspaper article that included some reflections by those who participated, a wonderful example of “working out loud” that has also created additional ripples …

In an effort to foster a stronger culture of inclusion, the Committee on Social Justice, Inclusion, and Diversity (CSJID) invited the entire Friedman community to participate in Food Solutions New England’s (FSNE) 21-Day Racial Equity Habit-Building Challenge. The CSJID is a multidisciplinary committee of faculty, students, and staff of Friedman committed to finding ways to promote social justice, inclusion and diversity in its teaching, research, and programs. The three-week challenge took place from April 2 to April 23 and creates time and space for a community to come together to build better social justice habits, particularly those dealing with issues of race, power, privilege, and leadership. These habits range from the personal, such as identifying and deconstructing our own biases, to the institutional, where we think through ways to advance racial justice in our schools and organizations.

To complement the challenge, the CSJID also hosted three informal lunchtime chats every Tuesday to encourage us to find community and connect with each other as we attempt to identify ways we can personally work to dismantle racism and become leaders for a more just, equitable food system. 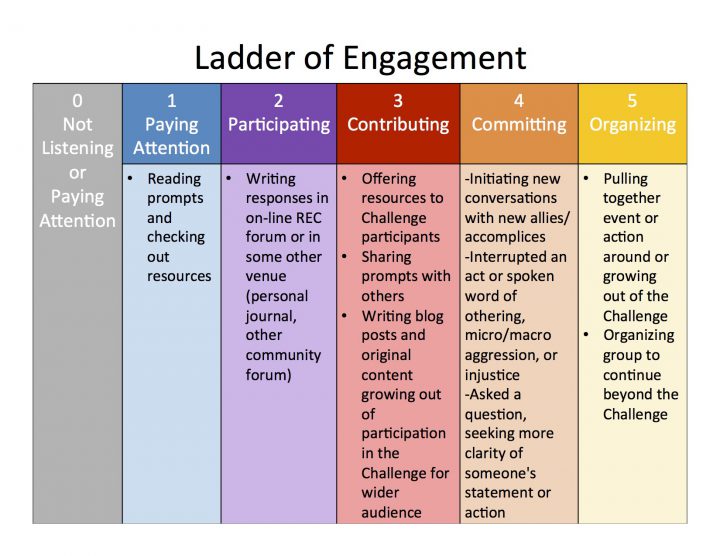 One way the design team has been thinking about the theory of change behind the Challenge is that we are hoping that participants move up the ladder of engagement (thanks to Bruce Hoppe of Connective Associates for the original framework that we have adapted above). That is, the Challenge minimally gets people to move from not listening or paying attention to paying attention and participating. Beyond this, while we know it will not be everyone, some will and have become more active and move up the ladder to committing to leading/organizing other efforts and actions. What contributes to this movement? We can’t always know, but there is certainly something about the ongoing work of weaving connections and building community to create a sense of support and moral courage. And we are already talking about next year’s Challenge and intervening steps that can be taken to build on this year so that 21 days become a 365 day a year commitment.