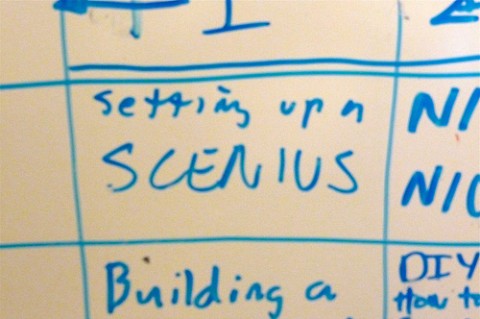 This post is a slightly edited email message from Bart Westdijk of the New England Grassroots Environment Fund (NEGEF).  NEGEF has 16 years experience resourcing the grassroots, thousands of citizen-led environmental and civic engagement initiatives around New England.  Bart spearheads some of the amazing work the Fund is doing in the virtual and social media spheres to better connect grantees, add value in new ways, and create a larger sense of movement.  Exciting new ventures include an emerging crowdfunding initative with ioby and a grassroots leadership skills building academy.  Keeping in the spirit of NEGEF’s emphasis on collaboration, networks, and partnership for social change, Bart sheds some light on the concept of scenius . . .

Have you heard of the term “scenius”?  Not sure if the term is really going to stick, but it’s a cool concept.  It goes into the cultural awe currently reserved for geniuses.  The scenius theory says that many of our historic (cultural, economic, etc.) geniuses didn’t do it all solo.  Shakespeare had a whole team of collaborators, Elvis had Sun Records.  There are many lists of “most powerful” and “most influentia”‘ people to perpetuate the idea of these singular geniuses but it turns out they aren’t so singular at all.

Scenius stands for the intelligence and intuition of a whole cultural scene.  Examples include London’s Bloombury group with Virginia Woolf and John Maynard Keynes or writer Gertrude Stein bringing together Pablo Picasso, Ernest Hemingway and F. Scott Fitzgerald.  Silicon Valley would be a modern-day equivalent.  Anyway, the idea of scenius, or co-creation, holds so much promise!  But it’s a real challenge to convey that message in a coherent way (i.e. not sound too floaty or spiritual, though that is a dimension to include in our work more).  Even though cooperation has been the architect for creativity throughout evolution, our culture still puts so much emphasis on individuals.  A tough meme to change.

The video you shared yesterday, Curtis, was a very cool reminder of the importance of the follower(s), of the crowd, sharing and adding their perspectives.  This is a reminder to create space for mutual appreciation, (rapid) exchange of tools and techniques, network effects of success and (local) tolerance for novelties (those happen to be the 4 factors of ‘scenius).   Seem like very good guiding principles as we all continue to build out the grassroots support model.  Who knows, maybe some day some of our biggest philanthropic institutions will do away with their genius-focus and rather than naming themselves after one individual and operating top-down, embrace the concepts of co-creative engagement.  We can at least invite them to help us all understand the process.