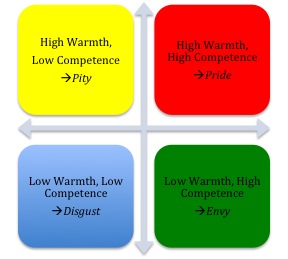 When people lack empathy with other people or people groups, it’s easy to exclude them from the community of humans worthy of treatment as full human beings. This is what social neuroscientists, social psychologists, and mediators call moral exclusion – the judgment (implicit or explicit) that some people are beyond the circle of moral concern and not subject to moral values.

In studies by Lasana T. Harris and Susan T. Fiske, reactions to a photos of a variety of people yielded a range of responses. Photos that were rated low on warmth (positive intentions) and low on competence (the capacity to carry out their intentions) elicited disgust, which was associated with dehumanizing those people. Those photos included people who were homeless and people doing drugs (and were presumably addicted).

The neuroscientists have even demonstrated that people’s brains do not respond in the same way to people in dehumanized groups as they do to people in general. The part of the brain associated with recognizing humans fails to activate. Conversely, people associate these groups (often unconsciously) with features typically ascribed to objects or animals. These twin phenomena provide implicit justifications for neglect, unwillingness to help and even violence against the outgroups. They go a long way toward explaining the typical lack of righteous indignation at the mistreatment and misfortune of outgroups. People are much less willing to share responsibility for the well-being of such dehumanized people, for whom they have no empathy and with whom they have no connection. It’s much easier for them to “otherize” and convince themselves that injustices are the problem or even the fault of those who suffer them. Without empathy, it’s difficult to widen the circle of moral concern; without that wider circle, it’s impossible to build and sustain a strong movement for equity and justice.

The good news is that the neural networks that reflect a lack of empathy and reveal moral exclusion are not destiny. The research on implicit bias tells us that we can repattern these neural connections through conscious effort. Brene Brown also describes four features of empathy, which are actually practices we can embrace and improve: taking another’s perspective, staying out of judgment, recognizing others’ emotions, and communicating those emotions. Building empathy—practicing love—becomes a powerful way to build the connections between people that can lead to justice.