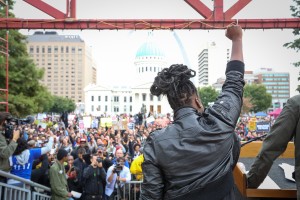 Last weekend, thousands of activists converged in Ferguson, Missouri for Ferguson October, a weekend of resistance including marches, panels, creative actions and civil disobedience. The purpose of the weekend was “to build momentum for a nationwide movement against police violence.” Two months ago, an unarmed Black man, Michael Brown, was killed in Ferguson by a white police officer who has not yet been arrested. While Mike Brown’s death was not an anomaly – at least two African American males are killed by law enforcement every week in the U.S. – the energy that is building in Ferguson, the organizing that is deepening there, the connections between Black activists and racial justice advocates of all races across the country that are being forged, and the new level of attention that Ferguson is bringing to this disturbing trend across the nation is new. I believe that we are in the midst of a crisis in this country. I believe that the young people and their allies who are on the front lines in Ferguson are calling all of us to action.

I believe this “movement moment” as many are calling it is about much more than Ferguson. This moment is opening up new opportunities for us to face and undo racism in all of its forms in all corners of this country. Let us finally declare that #BlackLivesMatter, all lives matter, and make this our reality.

To learn more, check out:

#BlackLivesMatter would not have gone so viral as a meme over the last several months if Black Lives Matter were not something we all needed to hear.

Some of the questions for me, as a white person who is tired of hearing stories like Mike Brown’s, John Crawford’s, Trayvon Martin’s, and Oscar Grant’s, are: