Check out the ways that love of her many identities frees up spoken word artist Jamila Lyiscott to be her full self. She reminds us that a  full, loving embrace of yourself and your cultures enables others to see you more fully and embrace all of your cultures, while it makes space for others to do the same for themselves. That’s change making at a personal level that can radiate outward to the entire community.

Today, a baffled lady observed the shell where my soul dwells
And announced that I’m “articulate”
Which means that when it comes to annunciation and diction
I don’t even think of it
‘Cause I’m “articulate”
So when my professor asks a question
And my answer is tainted with a connotation of urbanized suggestion
There’s no misdirected intention
Pay attention
‘Cause I’m “articulate”
So when my father asks, “Wha’ kinda ting is dis?”
My “articulate” answer never goes amiss
I say “father, this is the impending problem at hand”
And when I’m on the block I switch it up just because I can
So when my boy says, “What’s good with you son?”
I just say, “I jus’ fall out wit dem people but I done!”
And sometimes in class
I might pause the intellectual sounding flow to ask
“Yo! Why dese books neva be about my peoples”
Yes, I have decided to treat all three of my languages as equals
Because I’m “articulate”
But who controls articulation?
Because the English language is a multifaceted oration
Subject to indefinite transformation
Now you may think that it is ignorant to speak broken English
But I’m here to tell you that even “articulate” Americans sound foolish to the British
So when my Professor comes on the block and says, “Hello”
I stop him and say “Noooo …
You’re being inarticulate … the proper way is to say ‘what’s good’”
Now you may think that’s too hood, that’s not cool
But I’m here to tell you that even our language has rules
So when Mommy mocks me and says “ya’ll-be-madd-going-to-the-store”
I say “Mommy, no, that sentence is not following the law
Never does the word “madd” go before a present participle
That’s simply the principle of this English”
If I had the vocal capacity I would sing this from every mountaintop,
From every suburbia, and every hood
‘Cause the only God of language is the one recorded in the Genesis
Of this world saying “it is good”
So I may not always come before you with excellency of speech
But do not judge me by my language and assume
That I’m too ignorant to teach
‘Cause I speak three tongues
One for each:
Home, school and friends
I’m a tri-lingual orator
Sometimes I’m consistent with my language now
Then switch it up so I don’t bore later
Sometimes I fight back two tongues
While I use the other one in the classroom
And when I mistakenly mix them up
I feel crazy like … I’m cooking in the bathroom
I know that I had to borrow your language because mines was stolen
But you can’t expect me to speak your history wholly while mines is broken
These words are spoken
By someone who is simply fed up with the Eurocentric ideals of this season
And the reason I speak a composite version of your language
Is because mines was raped away along with my history
I speak broken English so the profusing gashes can remind us
That our current state is not a mystery
I’m so tired of the negative images that are driving my people mad
So unless you’ve seen it rob a bank stop calling my hair bad
I’m so sick of this nonsensical racial disparity
So don’t call it good unless your hair is known for donating to charity
As much as has been raped away from our people
How can you expect me to treat their imprint on your language
As anything less than equal
Let there be no confusion
Let there be no hesitation
This is not a promotion of ignorance
This is a linguistic celebration
That’s why I put “tri-lingual” on my last job application
I can help to diversify your consumer market is all I wanted them to know
And when they call me for the interview I’ll be more than happy to show that
I can say:
“What’s good”
“Whatagwan”
And of course …“Hello”
Because I’m “articulate”4
Thank you.
(Applause) 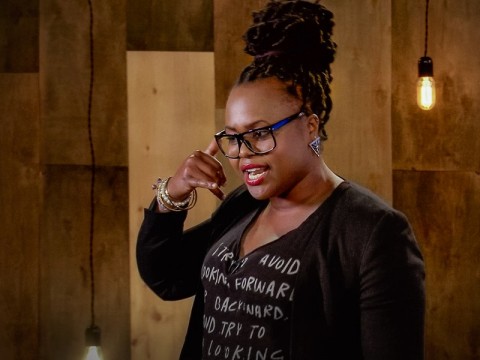