The CHN describes the straightforward and deeply challenging struggle of black people (and I think it’s fair to say all people of color in some way) for psychological freedom from racism.

“The toxic idea that Black people are not as beautiful, lovable, capable, and worthy as other people continues to undermine our sense of self-worth, the well-being of our families, and our children’s sense of positive possibilities.

“It contributes to the Black-White academic achievement gap, the epidemic of violence among Black youth, the mass incarceration of Black men, women, and youth, and many of the other challenges facing Black people today.

“Toxic ideas about the inferiority of Black skin, Black hair, and Black people will not disappear on their own. As a people, we have to be intentional about working to overcome these ideas and other negative emotional legacies of enslavement and racism.

“We have to take the time to deepen our understanding of the impact of our history on our emotional lives and relationships, share our stories, detoxify our minds and spirits, revitalize ourselves and each other, and tell ourselves a new, liberating, and empowering story about who we are and what we are capable of doing–as individuals and as a community.

“As a people, we have accomplished great things even while carrying on our shoulders the enormous weight of the lie of Black inferiority. CHN believes that there will be no limits to what we will be able to achieve, once we free ourselves and our children from the lie, and take the time to heal.”

Some of us are reluctant to engage in this level of work because others might be tempted to think that this is the only remaining work to undo racism, or to think that the racially disparate outcomes are entirely the fault of people of color. The need for this level of internal work is real AND it’s no excuse for avoiding doing the equally hard work “out there” to address policies, practices, and opportunity structures that limit opportunity for black people and other people of color.

Where do we go from here? First, we must massively assert our dignity and worth. We must stand up amid a system that still oppresses us and develop an unassailable and majestic sense of values. We must no longer be ashamed of being black. (All right) The job of arousing manhood within a people that have been taught for so many centuries that they are nobody is not easy.

Even semantics have conspired to make that which is black seem ugly and degrading. (Yes) In Roget’s Thesaurus there are some 120 synonyms for blackness and at least sixty of them are offensive, such words as blot, soot, grim, devil, and foul. And there are some 134 synonyms for whiteness and all are favorable, expressed in such words as purity, cleanliness, chastity, and innocence. A white lie is better than a black lie. (Yes) The most degenerate member of a family is the “black sheep.” (Yes) Ossie Davis has suggested that maybe the English language should be reconstructed so that teachers will not be forced to teach the Negro child sixty ways to despise himself, and thereby perpetuate his false sense of inferiority, and the white child 134 ways to adore himself, and thereby perpetuate his false sense of superiority. [applause] The tendency to ignore the Negro’s contribution to American life and strip him of his personhood is as old as the earliest history books and as contemporary as the morning’s newspaper. (Yes)

To offset this cultural homicide, the Negro must rise up with an affirmation of his own Olympian manhood. (Yes) Any movement for the Negro’s freedom that overlooks this necessity is only waiting to be buried. (Yes) As long as the mind is enslaved, the body can never be free. (Yes) Psychological freedom, a firm sense of self-esteem, is the most powerful weapon against the long night of physical slavery. No Lincolnian Emancipation Proclamation, no Johnsonian civil rights bill can totally bring this kind of freedom. The Negro will only be free when he reaches down to the inner depths of his own being and signs with the pen and ink of assertive manhood his own emancipation proclamation. And with a spirit straining toward true self-esteem, the Negro must boldly throw off the manacles of self-abnegation and say to himself and to the world, “I am somebody. (Oh yeah) I am a person. I am a man with dignity and honor. (Go ahead) I have a rich and noble history, however painful and exploited that history has been. Yes, I was a slave through my foreparents (That’s right), and now I’m not ashamed of that. I’m ashamed of the people who were so sinful to make me a slave.” (Yes sir) Yes [applause], yes, we must stand up and say, “I’m black (Yes sir), but I’m black and beautiful.” (Yes) This [applause], this self-affirmation is the black man’s need, made compelling (All right) by the white man’s crimes against him. (Yes)

Now another basic challenge is to discover how to organize our strength in to economic and political power. Now no one can deny that the Negro is in dire need of this kind of legitimate power. Indeed, one of the great problems that the Negro confronts is his lack of power. From the old plantations of the South to the newer ghettos of the North, the Negro has been confined to a life of voicelessness (That’s true) and powerlessness. (So true) Stripped of the right to make decisions concerning his life and destiny he has been subject to the authoritarian and sometimes whimsical decisions of the white power structure. The plantation and the ghetto were created by those who had power, both to confine those who had no power and to perpetuate their powerlessness. Now the problem of transforming the ghetto, therefore, is a problem of power, a confrontation between the forces of power demanding change and the forces of power dedicated to the preserving of the status quo. Now, power properly understood is nothing but the ability to achieve purpose. It is the strength required to bring about social, political, and economic change. Walter Reuther defined power one day. He said, “Power is the ability of a labor union like UAW to make the most powerful corporation in the world, General Motors, say, ‘Yes’ when it wants to say ‘No.’ That’s power.” [applause] 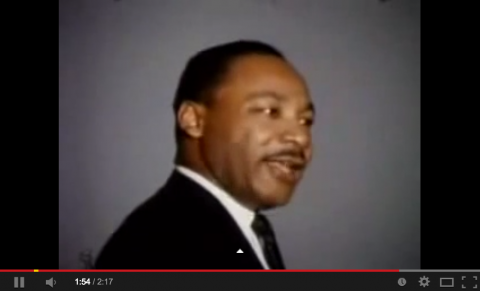