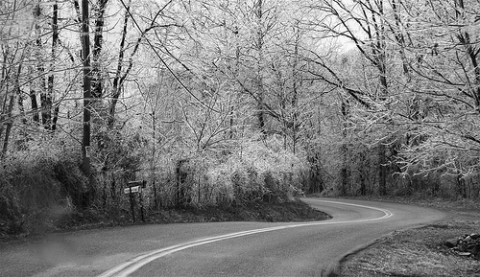 It was at this time a year ago that I made the trip to Keene, New Hampshire to teach my final weekend Change Models class of the semester at Antioch New England.  Just a few days prior, the entire region had been rocked by an ice storm for the ages.  When the storm hit I was in Maine.  Driving home the next day I heard reports about the worst damage being concentrated in western Massachusetts and southern New Hampshire.  All that had slipped my mind when I got up early on Sunday morning to drive to Keene.  It came rushing back when I got off of Route 2 heading north and the world turned dark and quiet.  Everything in sight was cocooned in ice.  Trees sagged.  Homes along the roadside for miles were without lights.  Businesses were shuttered.  The awesome force of nature really began to sink in.

By the time I got to Keene, the damage was less extreme.  The heat was on and most of the students managed to make it to class.  Everyone had their tales about where they were during the storm.  One that I will never forget came from my co-teacher, Bob, who lives in a town east of Keene.  A few weeks prior, Bob’s wife had been diagnosed with breast cancer.  Bob was due to drive her to Dartmouth-Hitchcock Hospital (an hour away) on what was to be the day after the storm for some important tests.  When they woke up that morning and looked outside, tree branches (and entire trees) were strewn everywhere.  The road was impassable.  As Bob stood in the driveway surveying the mess, a neighbor approached and struck up conversation.  When the news of the medical test came up, the neighbor told Bob to hold on.  Minutes later he returned with a brigade of people from the neighborhood armed with chainsaws.  In less than an hour they had cleared enough of the debris so that Bob’s car could access the main road.

I once heard the singer Greg Brown offer his perspective that unless we really need each other, community doesn’t mean much.  This sentiment was taken further by Bill McKibben in a recent interview during which he said that the real solution to climate change will come when we realize we are dependent upon one another.  In part because of technology (and fossil fuels), he says, we’ve lost the skill of being good neighbors and rooting ourselves locally.  Of course, the reality is that we do need one another, and our coming future may drive that home more than ever.  So why not get ahead of the game?  What if we claimed nonindependence before the storm?  What might that look like?