This past weekend’s CommonBound Conference was quite the experience.  It was inspiring to be with the more than 600 participants from around North America talking about and sharing examples of what it might take to evolve a just and sustainable economy.  I found the event’s closing plenary, an interview of and conversation between Adrienne Maree Brown, Gar Alperovitz, and Gopal Dayaneni, to be particularly stirring. For those who missed it, here is a smattering of what was buzzing in the Twittersphere . . .

“I’m a pleasure activist. How do we make justice the most pleasurable experience a human being can have?” @adriennemaree #CommonBound

“What is the system that will nurture our vision and values? We must move beyond ideology, and delve into the structure.” @GarAlperovitz #CommonBound

“Cultivating the muscle of radical imagination to dream beyond fear together.” @adriennemaree Now THAT’S inspirational! #CommonBound

@GopalDayaneni at #CommonBound : “Those who have been on the front lines of the crises are those who are best equipped to guide us.”

“Systemic change is not about political and economic systems in the end. It is personal and existential.” –@GarAlperovitz

Check out the rest of the Twitter stream at #commonbound and more about the New Economy Coalition on their web page. 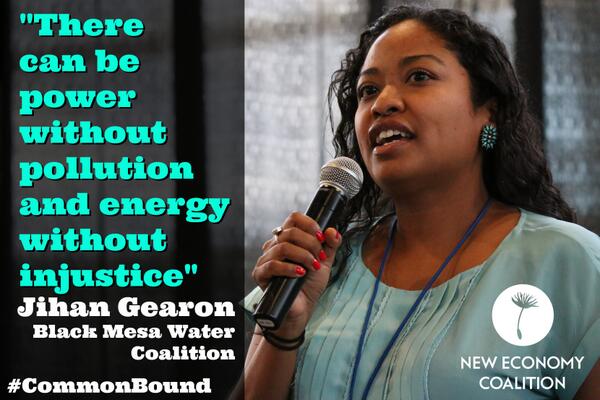