So I set out with the following thought experiment in reading the book: How does the concept of essentialism have relevance to the pursuit of social justice?  I started with the observation that many of us in the fight for equity and “big democracy” (and little democracy, for that matter) feel overwhelmed, not simply by the obstacles to overcome, but in many cases by our approach. Many feel caught up in the same culture of busy-ness and information overwhelm as those that McKeown mentions in his book.

I then pulled out some of the quotes and questions that caught my attention and seemed to have bearing on the social change work that we support at IISC.

“Is this the very most important thing I/we should be doing with my/our time and resources right now?”

Here I was reminded of the writings of Howard Thurman, philosopher, theologian, educator, civil rights leader and mentor to Dr. Martin Luther King Jr. In particular, Thurman’s reflections that appear in his book Meditations of the Heart seem of particular relevance.

“Give me the listening ear, the eye that is willing to see.”

In the extended passage that features this refrain, Thurman prayerfully appeals to the inner wisdom of people to find the path of “deeper consecration and higher resolve” that breaks free of “old ruts and established habits.” For Thurman, what is essential is “the sound of the genuine” in each of us, which steers us away from spending “days on the ends of strings that somebody else pulls.”  This process of discernment is critical for a sense of authenticity and freedom that creates space for the authenticity, expression and freedom of others. Similarly, the essentialist perspective looks for what is fundamental to our-selves and others as informing how and where we invest our energies.

“What if we stopped being busy as a measurement of importance?”

Reading this question, I was reminded of the recent Facing Race Conference in Dallas.  For me, one of the most powerful and inspiring parts was an inter-generational dialogue between composer, musician, scholar, historian, and producer, Bernice Johnson Reagon, her daughter Toshi and her granddaughter Tashawn.  At one point in their performance/conversation Toshi offered commentary on what she and her mother have heard people call “kumbaya moments,” meaning instances that people feel are (too) “touchy feely,” not action-oriented enough, or that cover up/pass over more difficult work and conversations.  Toshi and Dr. Reagon both took exception to the derogatory use of the term, stating that the Civil Rights movement depended upon its fair share of “kumbaya moments,” through the intentional invocation of a bigger sense of purpose, spirit and community via song and fellowship. In the same vein, the essentialist perspective looks beyond busy-ness as the defining value of our days to the fuller picture of what creates and sustains movement.

Here my thoughts went to a very recent conversation with colleagues about what is happening in the wake of the non-indictments in the deaths of Michael Brown and Eric Garner. Not only has there been an obvious upsurge and spreading of outrage, but sustained and organized movement in the name of #Blacklivesmatter.  Behind this movement has not only been coordination, but an explicit grounding in values, including “abiding love, decentralization, and discipline.”  I see this commitment and the values themselves as aligning with essentialist principles – grounding in what matters and sustains, sharing the work, and maintaining a steady focus.

Indeed, it would seem that equity and living democracy happen by design, not by default, and by the disciplined commitment to cut through the constant noise of distraction, detraction and de-humanization.

I, for one, am compelled by the call to become more essentialist in my work and life in the coming year.  How about you? 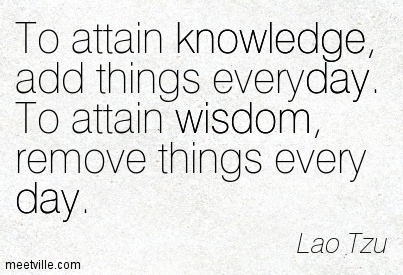