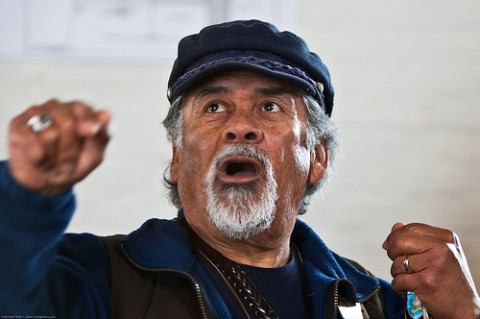 This is a slightly edited re-post of something I wrote a couple of years ago, and it came back to mind during conversations these past few days with a group of conservation biologists about how to create more of a compelling case for their work, and also to better understand where various stakeholders (allies and adversaries) are coming from with respect to preserving precious natural resources.  The point has been made several times and in different ways that narrative speaks louder than numbers, and that in our change work, it helps if we become acquainted with the stories of others, and work ultimately at weaving ourselves into something more collective.

The other day I reread a passage from Barack Obama’s Dreams From My Father and was struck by its insight and beauty.  The passage comes at a point when Obama is reflecting upon his work as a community organizer in Chicago, which became all consuming as he often spent his social time with community leaders and residents, immersing himself in their lives.  He writes:

“At a Christmas party, I danced with women old enough to be my mother.  I talked sports over stale cheese puffs and meatballs with husbands who had been reluctantly dragged to the affair.  I counseled sons and daughters on their college applications, and played with grandchildren who sat on my knee.  It was during such times when familiarity or wariness dissolved the lines between organizer and those that I was supposed to be organizing that I learned the most about the work I had chosen.  I learned that the self-interest I was supposed to be looking for extended well beyond the immediacy of issues, that beneath the small talk and sketchy biographies and received opinions, people carried within them some central explanation of themselves, stories full of terror and wonder, studded with events that still haunted or inspired them.  Sacred stories.”

I really resonate with this notion of “sacred stories” that lie beneath the self-interest relative to issues that often polarize us.  These are the stories where we can really find one another and experience our shared interest and humanity (sacred means “made whole”).  I know their power to unite and the time and attention that is required to access them.  And I know the suffering that can come from being disconnected from our own stories.  In a world of sound bytes and short attention spans, what can we do to reclaim our stories and weave shared narratives that take us to new depths and heights?  The question points in the direction of prioritizing relationship and the creation of spaces where we can tend to the work of being with one another, of sharing, listening, and healing.

Perhaps we might find more time in the coming summer season to practice with our friends and loved ones.  What are the stories we have yet to access?  What stars remain unseen?