Standing with the Young People

We have just heard that the Grand Jury did not indict Darren Wilson for killing Michael Brown.  The brilliant and courageous young people of Ferguson know that justice has not been served. The relentless profiling, criminalization, harassment and killing of young people of color is a an old an ongoing crisis in this country. It must stop. 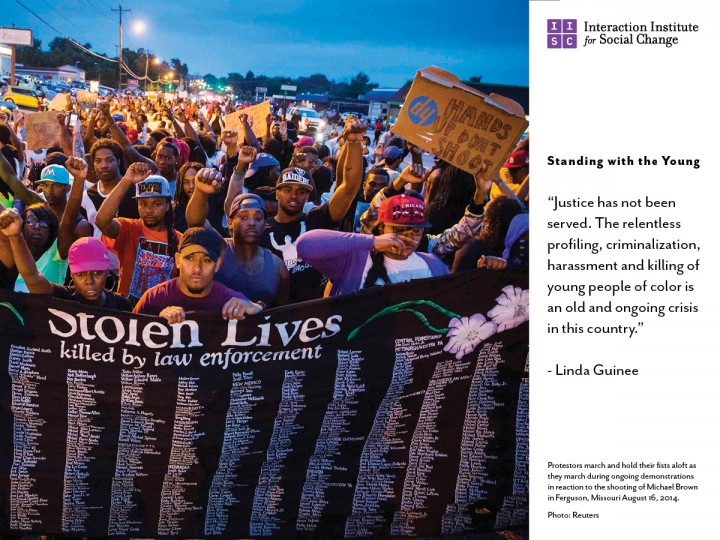 I have friends and family who have lived with the privilege of being white and being “protected and served” by law enforcement and believe that the judicial process produces the right outcomes. I’ve lived with that same privilege, but I do not believe that.  I believe we must listen to those most impacted – people of color in this country – about the reality of police brutality and the justice system. This doesn’t mean that I think individual first responders are “bad people” – but the system has produced very bad outcomes – and needs to change.

I’m very, very, very concerned for the safety of the young people of Ferguson, who are by and large peacefully protesting, and the young men and women of color across this country. Not just now – but every day. In this moment, with the intense militarization of the police in St. Louis County, the young people who will protest the Grand Jury’s non-indictment and the relentless ongoing injustice of police overuse of force, racial profiling and deep indignity – the young people are again putting their lives on the line. That is true in St. Louis County – and it’s true across the country.

And I’m concerned that things haven’t changed.  That we’ve been doing civil rights work and racial justice work for a very long time and the situation on the ground hasn’t changed enough.  I’m aware that all the work that’s been done on awareness and skill building around white privilege has not made much of a dent – that the structures and systems continue to destroy the lives of young people of color.  We need a new approach.  We need it as soon as possible. And, as always, it will most likely come from listening to those most affected – to the young people of Ferguson, Missouri – and the Fergusons in all of our neighborhoods.

I pray we will all do everything we can, in every moment we can, to support the young people of Ferguson (and all Fergusons) and keep them safe. I will. #BlackLivesMatter!