The Living World is Here 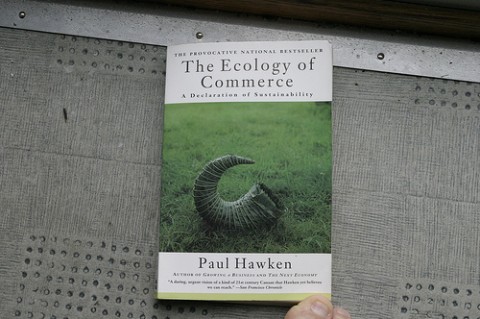 What follows is a piece of the commencement address that Paul Hawken delivered at the University of Portland in 2009.  His words join with those of many others amidst our current global conundrum to remind us that we are of the natural world, not separate from “the environment.”  Our current economy and education system tend to relegate us to consumers of our life support system, which puts a whole new spin on this notion of “recession.” Time to come out of our caves and get reacquainted with our animal selves and deeper wisdom.  Full employment awaits!

“The living world is not ‘out there’ somewhere, but in your heart. What do we know about life? In the words of biologist Janine Benyus, life creates the conditions that are conducive to life. I can think of no better motto for a future economy. We have tens of thousands of abandoned homes without people and tens of thousands of abandoned people without homes. We have failed bankers advising failed regulators on how to save failed assets. We are the only species on the planet without full employment. Brilliant. We have an economy that tells us that it is cheaper to destroy earth in real time rather than renew, restore, and sustain it. You can print money to bail out a bank but you can’t print life to bail out a planet. At present we are stealing the future, selling it in the present, and calling it gross domestic product. We can just as easily have an economy that is based on healing the future instead of stealing it. We can either create assets for the future or take the assets of the future. One is called restoration and the other exploitation. And whenever we exploit the earth we exploit people and cause untold suffering. Working for the earth is not a way to get rich, it is a way to be rich.”