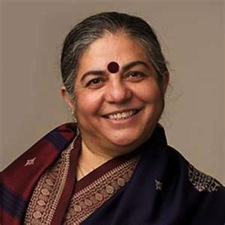 At Transforming Race, Dr. Vandana Shiva started her talk with a provocative comment. “I don’t know why the love for monoculture and the love for power are so intimately connected.” She went on to detail the calculated efforts of the British to subjugate the Indian people, in part by imposing the production of cash crops, destroying their ability to produce food and destroying their markets.

The more details I hear about the colonial era, the more dumbfounded I am that the transformation of people into non-people in order to satisfy a lust for power and wealth were thought to be reasonable and allowed to happen. It is even more striking how the legacy from that era persists.

Dr. Shiva made a powerful case for connecting the sovereignty of seeds, food production and people. Quoting Gandhi, she reminded us that “There’s  nothing like political freedom without economic freedom.” And economic freedom requires freedom from the imposition of intellectual property rights in seed. Farmers in India are prohibited from saving seed from one harvest to the next, and instead must purchase genetically modified seed that has been patented by Monsanto. She pointed out the absurdity of giving a patent—acknowledgement of creation—for a form of life that a company has not created, but only modified—and that not necessarily in a good way.

She also stated plainly that “A billion people are not getting enough food. It’s not about no rain. It’s a structural system of exclusion.” And that is the critical connection between Dr. Shiva’s work around seed sovereignty and healthy food systems and the work of the Transforming Race conference.