While in some ways understandable (few of us probably like the idea of collapse and chaos), actions taken to preserve a certain kind of order and direction (not to mention power and privilege) can be particularly perverse when they reinforce the very patterns that are leading us down the road to collective ruin. And what more people are beginning to sense is that many social, economic and political patterns that have been established and gotten us to where we are must change for the sake of long-term survival and thriving.

“It takes a great deal of change to keep things the same.”

The phrase above, which appears as a sub-title in Bateson’s essay, caught my attention, even froze me in my reading tracks. She reminds readers that change is a constant in complex living systems, so that stability and sameness over time can take considerable effort to pull off. The effort to keep larger forces from shifting current arrangements is ultimately impossible and in the nearer term it can exact a heavy toll. Bateson notes that trying to keep any part of a complex system still “requires that all the relationships upon which this part is inter-dependent must alter to absorb the shifting.” This can push the entire system toward greater vulnerability. I’m thinking now of a personal example – a recent flirtation I had with burnout this spring, spurred by anxiety about the current political and economic context, which had me pushing myself harder than ever to do work that was already exacting, and in the process putting considerable stress on my family and colleagues.

Letting go is not necessarily giving up; it can be letting come. 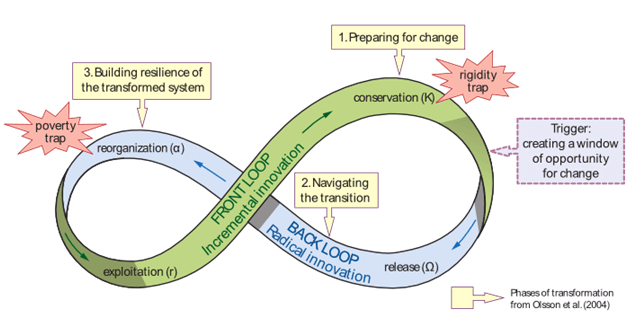 A key framework for my consulting work (and now personal development) is the adaptive cycle. The adaptive cycle offers a perspective on how living systems evolve over time and go through natural cycles of growth, (relative) dissolution and reorganization. According to this framework, at the peak of a system’s cycle of maturity (see #1 in image above), during which it has conserved resources and established predictable patterns and protocols, it threatens to become too rigid and unable to respond to changes in its environment. The key to avoiding collapse at this point is both a release of energy (#2) and an embrace of more radical (as opposed to superficial) innovation. This release may entail letting go of certain goals/expectations, ways of doing things and relationships. This means that some of the energy that is otherwise invested in preserving order and predictability can now be devoted to the generation of new forms and practices (see #3 in image above).

In other words, until there is significant letting go, it is difficult for anything new or renewed to come. To this point, I recently worked with a group of well-meaning academics who all acknowledged that they were being called to do things differently in their work and respective institutions of higher education, to be more relevant to the needs of their increasingly diverse and distressed students and the world that these students must navigate. And yet, by their own admission, they are so overburdened with demands that they can hardly give much more than passing thought or effort to substantive change. By one professor’s assessment, this can amount to irresponsibility of a very dangerous kind. 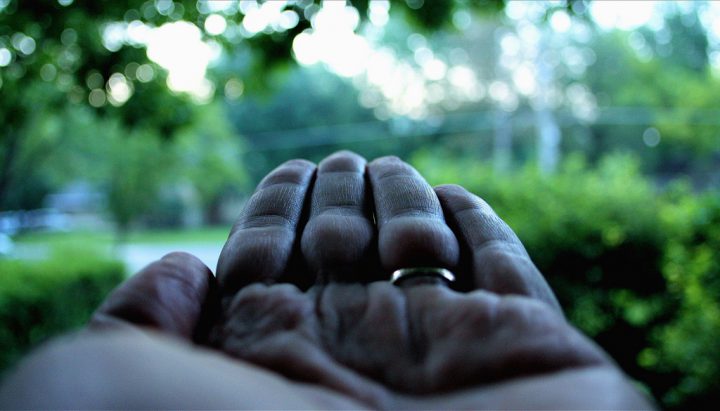 “The structures that allow for survival are bound to be temporary. Evolution is what happens when patterns that used to define survival become deadly.”

This is quite a wake-up call. She goes on to suggest that a helpful, if somewhat daunting, exercise is to take a mental trip through the unraveling and breakdown of a system or situation, going to the other side of what is feared and then asking how we would get along. Traveling back to the present from that point, what wisdom might we incorporate that breaks our current patterns? How might that help us to loosen our grip on what we know does not work, will not work and/or is ultimately harmful? Of course, the stakes (real and perceived) will be different for different people and contexts, but it strikes me as a crucial strategic question in this day and age to ask, “What can or must we let go of for the sake of life, liveliness and response-ability? If we don’t let go, then what?” Sometimes we do have to let go to see possibilities and our strengths. And it is also important to remember that there are tools and practices that can help people navigate the seeming void. More on that in a future post . , ,

“[We] cannot discover new oceans unless [we] have the courage to lose sight of the shore.” 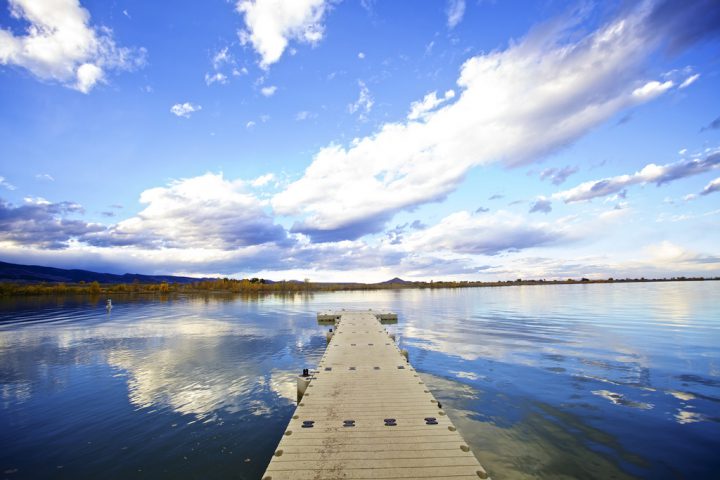 Photo by Zach Dischner, shared under the provisions of Creative Commons Attribution license 2.0.