Each effort has recognized that there is a dominant story that supports the existing system’s legitimacy. This has profound impact on what different players see as being possible. It is noteworthy that the narrative shifts each has called for are in the direction of more expansive and equitable definitions of health and development.

Communcation is the lifeblood of social systems, and each of these initiatives has recognized that power gets bound up in who has timely access to and also who shapes critical information, as well as what kind of information is valued.

Creating more equitable access to and determination of resources.

From financial to social to living and material capital, each of these initiatives has also recognized that inequitable distribution of resources has contributed to social disparities and overall systemic vulnerability. Another significant factor is who gets to say what is deemed to be valuable in the first place.

This leverage area flows as a matter of course from the two above. Systemic sickness and brittleness is evident in the fact that fewer people and power brokers are shaping systemic opportunities and outcomes, and often for their own benefit. Each of these efforts see more distributed decision-making and implementation as key to justice, sustainability and true prosperity.

Working with government to change incentives and supports in favor of healthier and more equitable opportunities and outcomes.

Each initiative recognizes the important role of government in changing policies and procedures in the direction of more just and sustainable means and ends. 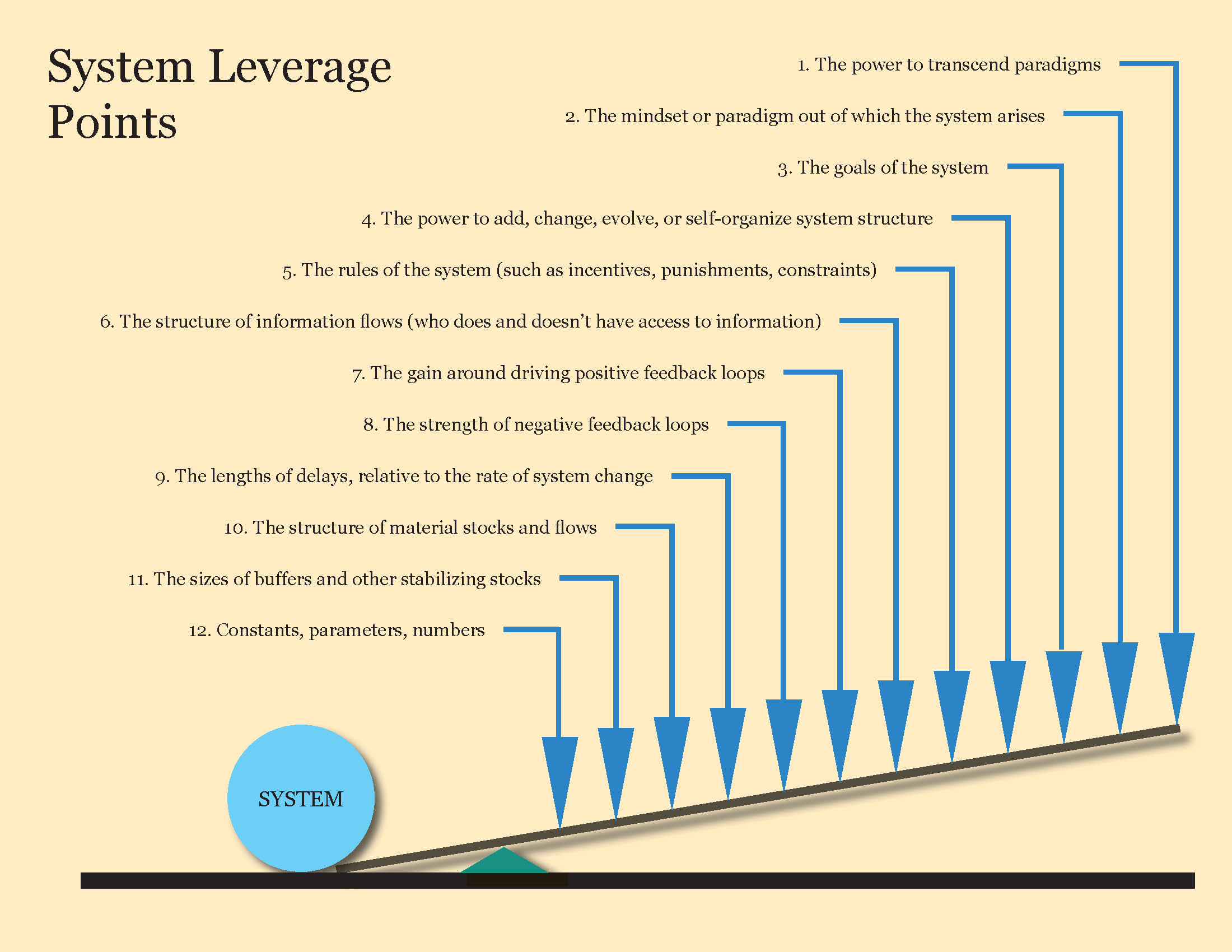 To get at any of these leverage areas clearly requires considerable clout – a network of diverse actors. And from our perspective at IISC, that network is not simply a means to an end.

Viewed in a certain way, and in consideration of the leverage areas mentioned above, intentionally developing human networks can be an important end in and of itself.

Part of the new story emerging across these various change efforts referenced above is a focus on what Sally J. Goerner calls “dynamic evolution,” which transcends the picture of a world built on competition, supremacy and selfishness. Through their multi-disciplinary study of energy network sciences (ENS), Goerner and her research colleagues point to an understanding of societal health as predicated upon more intricate human and organizational networks. Importantly, to deliver multiple goods in sustainable fashion, these networks must be characterized by:

In other words, given unhealthy biases toward “efficiency,” streamlining, monoculture, concentration of resources and systemic brittleness, Goerner and colleagues see more robust network connections, flow and variety as being fundamental to social change and long-term resilience.

Taking this one step further, the Capital Institute (to whom Sally Goerner is Scientific Advisor) has created a list of 10 indicators for systemic health with direct ties to human network development (see their paper “Regenerative Development: The Art and Science of Creating Durably Vibrant Human Networks“). These give more specific guidance as to what systemic change initiatives might pay attention to as signs that they are on the right track.

I am curious to hear reactions and experiences with applying this kind of a network lens to system change efforts, and as a new member of the Research Alliance for Regenerative Economics, I look forward to sharing additional insights from energy network sciences.