In 2015, the Food Solutions New England (FSNE) Network Team began a year-long process to better understand how we could support the region in achieving the New England Food Vision. The Vision describes a future in which at least 50% of our food is grown, raised, and harvested in New England and no one goes hungry. It looks ahead to the year 2060 and sees farming and fishing as important regional economic forces; soils, forests, and waterways cared for sustainably; healthy diets as a norm; and racial equity and food justice promoting dignity and well being for all who live in New England.

Why FSNE engaged in a systems mapping initiative

How can we connect, align, and act in solidarity to realize the “50 by 60” Vision? This has been discussed since the FSNE network formally launched in 2011 and was the presenting question for us in 2015. With A New England Food Vision published, the fifth in a series of six annual New England Food Summits on the horizon, and our commitment to racial equity and food justice firmly established, systems mapping was a logical next step in building shared priorities and strategies for collective impact for the network and “a roadmap” to the Vision. 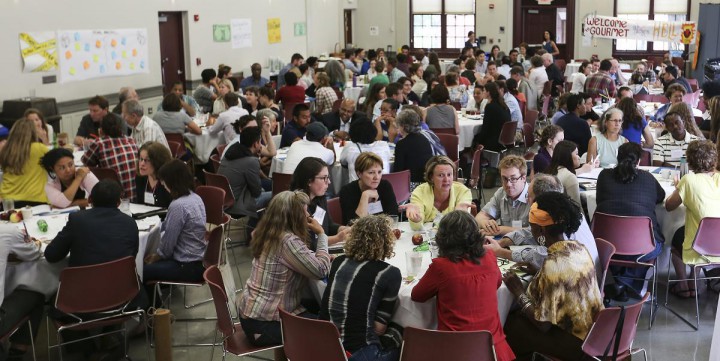 Systems mapping uses a variety of tools to help people develop a better understanding of the interactions, relationships and outcomes of different kinds of systems, including food systems.

A system, generally stated, is an interconnected set of elements that are organized in a way that achieves or produces something, whether intended (economic development) or unintended (soil erosion).

When people have a better understanding of systems, they are better able to identify actions that lead to desired outcomes.

The Institute for Strategic Clarity (ISC), a small consultancy expert in strategic systems mapping, was selected to guide the process. In April 2015, ISC began working with the Network Team on the first phase of a system mapping process.

Early on, the ISC facilitated an exercise in which the Network Team pooled knowledge and perspective to build a story of how we understood the changes that had taken place in our food system over the previous 40 years and the key factors that drove those changes. We then projected where we thought our food system would be by 2060 in terms of the percentage of food consumed in New England that is produced in the region if we let the system continue without interventions. We concluded that the percentage of local/regional food probably would not increase much from today’s ~10‐12% and that would leave a significant “gap” between that and the 50% goal of the Vision.

The ISC then translated our story into a map of values and goals, including for example “healthy people” and “healthy environment,” along with key determining factors such as capital investment, profitability, labor availability, wages, cost of basic foods, and subsidies for high nutrient food. Once the Network Team agreed that the map captured our collective thinking, ISC grouped components of the map to arrive at perspectives or areas of knowledge to engage in the next phase of the process.

The Network Team then brainstormed what came to be 21 leaders, topical experts, and practitioners representing these key perspectives, who were interviewed by ISC to learn what they think needs to happen to achieve the Vision. Each of their individual responses was “mapped” to illustrate key dynamics of the food system from their perspective that either work for or against their goals and aspirations.  Each interviewee “validated” their map in a second interview.

One of the most fundamental insights that resulted from the analysis was that we are operating in a context of two food systems: a dominant global system and a nascent alternative local and regional food system.

While that was not necessarily a new realization for many of us, it has important strategic implications: for FSNE it is not a question of “let’s fix the broken system or try to shift it,” but rather “let’s inspire, support, and grow the emerging alternative system,” and that means that FSNE’s work should focus on the positive and affirmative potential of what is already happening and what is envisioned in the Vision.

The ISC facilitated a three-day retreat in November 2015 with the FSNE Network Team, to review the individual maps, study and assess the implications of the big picture map, and develop an initial high‐level systems strategy. In creating this high-level strategy, we selected three indicators of the “health” of the emerging New England food system, three key dynamics that support overall systemic health, and four “leverage areas” where we can focus our collective efforts to stimulate the positive process dynamics.

Where we ended up This resulting system strategy map is a depiction of a strategic framework to guide priorities for the FSNE network. It has three main components:

In addition, underlying these components is a fundamental value of supporting human dignity generally and with specific regard to the food system.

This systems strategy is not a group of discrete pieces, but a collection of connected, integrated, and overlapping components. The first phase of the system mapping process began a larger effort to modify and expand on what needs to be done, how to do it, and how to measure progress.

We know food systems are only part of the broader issues facing society today. Yet food is basic for without it, all else fails.

So we in the FSNE Network and in our collaborations with others are eager to advance a greater collective effort by leading with the food system, in all its complexities and opportunities.

The FSNE Network Team used a food system mapping and analysis process to try to understand some of the ways in which FSNE could help influence the New England food system toward achieving the Vision. This graphic offers one visual interpretation of the high-level strategy that is emerging from this process. The graphic shows a pathway leading through a number of different landscapes that we find in New England (rural, urban, ocean) to the New England Food Vision (represented in the sun). Diverse people make their way along the path named “A New England Food System With Dignity,” bringing attention to a value that the FSNE Network Team believes underpins all necessary actions to achieve the Vision.

Along the way, three signposts direct people towards the Vision: democratic empowerment, a new food story, and sustainable economy. These three signs represent key system dynamics around which the FSNE Network Team is working to develop action strategies.

Four hand-held signs represent leverage areas, or ways in which FSNE could intervene in the system to most effectively impact positive change. These areas are: inspire with knowledge and stories; engage and mobilize people for action; cultivate and connect leadership; and make the business case.

As we develop more detailed and targeted strategies to transform the New England food system, we will focus on three integrated areas:

Activating these three system dynamics will help bring about the changes we need to realize the Vision.

We invite more and more people from across the food system to join arms and combine efforts to continue to grow a regional food system grounded in dignity and contributing to health and equity. As we make progress, more people participate and more resources flow into the system.

Where do we go from here?

The FSNE Network Team has just begun assembling three teams that will conceptualize and outline strategies to influence three broad system dynamics identified in the system mapping process: democratic empowerment, a new food story/narrative, and a sustainable economy. The Strategy Teams will officially launch with a daylong meeting in February 2017. Following a series of research, discussion, and meetings, the teams will reconvene in June to review recommended strategies and determine next steps toward the development of a unified 3-year plan for the FSNE network.

Fundamental to this emergent system is the ongoing weaving and building of trust among diverse stakeholders and FSNE has made important contributions to this and will have an important role to play in significantly broadening this work. Going forward, together we will define steps to develop specific strategies around and across the leverage areas to advance our shared work.