“You have to be patient, develop trust, and have people go with you.” These were words from Karen Masterson, co-owner of Johnny’s Luncheonette in Newton, MA as she talked about what it takes to align her business with the aspirations of the New England Food Vision.

“I’ve been chasing after local vegetables for 13 years. Some small operations cannot afford to do this.” Masterson offered both honest and inspiring words about the pursuit of a more robust regional food economy during a Sustainable Business Network of Massachusetts (SBN) B2B session hosted by FSNE last week in Cambridge, MA.

Twenty-five people attended the session, entitled “Making the Business Case for A New England Food Vision: Creating Conditions that Support Diverse Food-related Enterprises” where they heard an overview of the Food Solutions New England Vision, which sees the region becoming more self-sufficient in its food supply, while developing a thriving equitable and eco-logical food economy. FSNE Core Team members also shared progress of efforts to develop the associated stakeholder network and strategic framework, the latter including an emphasis on “making the business case” for a robust regional food system.

As a business owner, Masterson had many stories and insights to offer those in attendance, including the challenges of distribution and implications for price and availability of product. For many years, she has been committed to sourcing local whitefish on her menus.  “By offering items that don’t need to be fish specific, like fish tacos, or by serving an item just when it’s available (Monkfish Stew) it is possible to commit to local sourcing while keeping prices reasonable,” explained Masterson. “People have been seduced by cheap and convenient.” As such, she cautioned that the Vision can be off-putting and seen as “self-righteous” – “Food is very personal and change can be scary.”

Nevertheless, Masterson upheld the promise of another kind of value proposition embedded in the Vision – a commitment to community, to developing closer relationships between business-owners and community members, to keeping money in one’s community. Bing Broderick, Executive Director of Haley House Bakery Café in Roxbury, a neighborhood in Boston, agreed on many points. “Distribution is everything,” he said in a brief presentation, “it’s a big link we have to figure out.” And he added that it is important to get beyond the purely transactional nature of the dominant food system –

“There is power in spending dollars locally with people you know. It’s all about community. That way, if the price goes up, then you know why.” 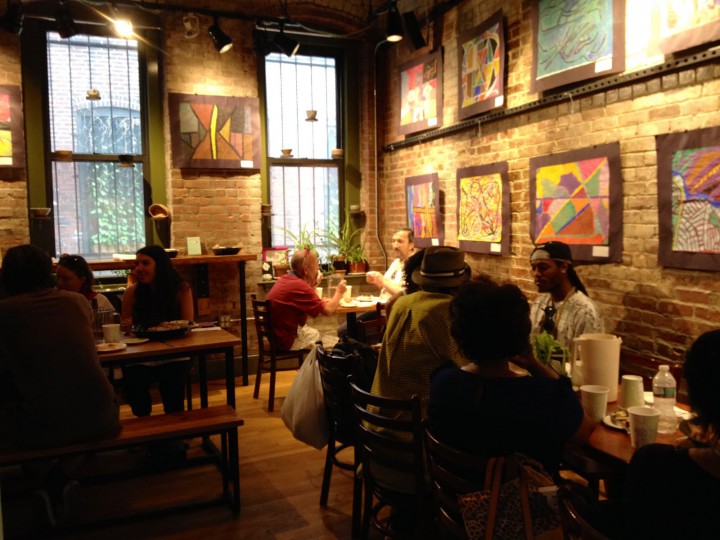 Those in attendance had many questions and comments about what it would take to achieve the Vision, some pointing in the direction of thinking differently about current assumptions underlying the existing food system and economy. Many spoke to the need for greater collective creativity, including leveraging excess capacity (the many cars already on the roads in the region and people with idle time who are eager to volunteer) and scaling existing innovations (apps such as Spoiler Alert, time banks, alternative currencies, barter systems). And a number mentioned policy and getting policymakers supporting a different set of values across the board, including human dignity and equity. As Broderick noted in a conversation about the challenges of urban agriculture,

“How do you have dignity in a city where you cannot afford to live?”

All of this generated much food for thought, and serves as a sign of conversations to come, as FSNE rolls up shirt sleeves this fall to set regional strategies to advance the emerging regional food system.