What will you be doing in 2060?  Food Solutions New England, a regional food systems learning and action network, has a vision of where citizens of these six states will be sourcing their food 50 years from now.  Its New England Food Vision posits that the region will produce at least 50% of its food in a healthful, accessible and environmentally and socially sustainable way by 2060.

Working toward this bold vision requires expansive, inclusive collaboration that addresses the diversity of needs and resources across the region and balances bold aspirations with practical actions.  Food Solutions New England (FSNE) has much to share about how to develop and support productive networks.  Curtis Ogden, consultant to FSNE’s Core and Network Teams and Senior Associate at the Interaction Institute for Social Change, shares some of the Team’s practices for network building. 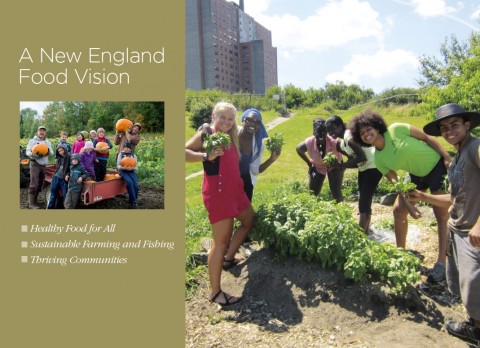 “[We] began with what we call a Network Design Team,” says Ogden.  Two years ago, a Network Design Process was convened under the auspices of the University of New Hampshire’s Sustainability Institute with financial support from the Kendall Foundation.  This process pulled together a group of stakeholders from across the region representing rural, urban and suburban areas and various functional perspectives on food—production, public health, access, as well as different cultural perspectives.  The goal: to conceptualize and realize the development of a network that would help lead the region towards a 2060 vision that had already been evolving out of New England regional food summits for the past few years.

By the year 2060, New England could produce at least 50% of what is consumed in the region.  This idea offered this diverse collective a rallying point around which to converge their energy.  Ogden frames the challenge and opportunity this way: “How do you create a social infrastructure around the vision?  How do you take these diverse states and communities, needs and opportunities, and help to align them?”

Recognize past work and successes.

Food and farm-related collaborations, working groups and networks of various types have existed in New England for decades, from NOFA to NESAWG.  To ensure engagement of those already working together in innovative ways, one of the organizers’ priorities was to recognize the existing relationships and honor the work that had already begun.  “There was no starting from zero,” said Ogden. “‘We are not pretending to create a network out of thin air.  There’s lots of good work and progress that have already happened and is happening.”  The organizers recognized that the network, in a sense, already existed.  The work was in part to connect some these initiatives and actors across the region and build upon their work to strengthen the whole.

Recognize differences in approaches and welcome them.

“A tension that often shows up in these kinds of networks is… between an action orientation and more of a process orientation,” says Ogden.  “Some people say, ‘I just want to get something done.’  Others say, ‘Wait we need to slow down.  We need to get to know each other.’”

“To me, process vs. action is a false dichotomy,” he says.  “Process can be action.  And action requires good process.”  As a facilitator, Ogden urges collaborators to balance these impulses rather than forging ahead with whichever seems most dominant or a default in a group.  “When we get more intentional and explicit about this tension, I see a deeper appreciation for how this work requires all kinds of sensibilities.”

Understand the diversity of interests and issues.

“When you talk about food system change, you have to get clear about what your starting point and question is.  In Vermont with the Farm to Plate Network it was, ‘How can we create a robust food producing economy here?’” says Ogden.  “In Rhode Island with the Food Policy Council it was, ‘We’ve got 15% of people here who are food insecure.  How do we address that?’  These are related but very different questions and each has implications for who shows up, who needs to show up and with what kinds of priorities.”

The FSNE network organizers realized that their commitment to representing the diversity of the region required a focus on social justice issues.  “It has meant putting racial equity front and center and saying, ‘This is not incidental to this work.  This is core to it.’  We have a food system that predictably leaves certain people out across the spectrum and that often aligns around race and adds up to racial disparity.” 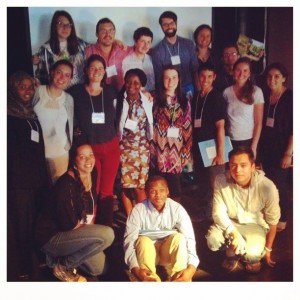 This focus wasn’t initially a priority for everyone in the room.  “For some, [this] can seem an irrelevant or unimportant conversation,” says Ogden. “So how do you get people to see beyond their own localized view, hold onto that and the bigger picture at the same time? That has been an interesting challenge.”

“The first step is ensuring that you have systemic diversity at the table,” says Ogden.  “Beyond diversity, it’s about creating inclusive processes that honor every voice, that honor different perspectives, that honor different ways of knowing…  This year we have had a practice of invoking stories of power, privilege and inequity when we get together.  People have been very forthcoming sharing from their own personal lives.  And that’s been very eye opening.”

Next Steps for FSNE

Getting to 50% regional food in the next five decades demands both urgency and patience.  It’s a lifetime of work that will take perseverance to accomplish.  FSNE is co-developing strategies for achieving the vision with the larger food systems community across the region as one of its next steps.

Another important next step is connecting FSNE’s galvanizing vision more deeply to the network’s commitment to diversity and equity. “The original conception of the vision was one very much rooted [in the] land and other available resources, and [in] accounting for climate change.  There was not such a strong food justice or racial equity edge to that vision,” says Ogden.  “So the other effort of the group is moving forward the racial equity conversation—moving forward the vision roll-out, and having those two come together.  Because, at the end of the day, the vision needs to reflect that deeper commitment.”

These recent efforts will culminate in this year’s Food Systems New England Food Summit to be held this summer in Providence, Rhode Island.  The roll-out will be a focal point of this gathering of leaders from across the region, and selecting the location was a conscious effort to bring access, equity, and urban agriculture issues to the fore.  “It will be the first time [the summit is] in southern New England,” says Ogden.  With its multicultural, urban population, he explains, “It will be in the most demographically complex setting to date.”

Even though 2060 may seem a long way off, the vision for FSNE is even further reaching.  “This is not short-term work,” says Ogden.  “This is work… that will never stop when you think of what it means to adjust and adapt to an ever-changing and complex world.  So we’ve got to have a learning orientation of humility… and an orientation that recognizes that we need each other.  And there is a lot of that happening already.”