Just like that, an unexpected gift and enhanced visual value! I asked for Claudio’s permission to post, which he granted, and we both agree it is a wonderful example of what happens when you work out loud (see principle #9 below). Enjoy, and please feel free to rift on these images and the principles below, and if you do, let both of us know what you create. END_OF_DOCUMENT_TOKEN_TO_BE_REPLACED

END_OF_DOCUMENT_TOKEN_TO_BE_REPLACED

The two of them were hiking in the mountains when the 7.8 magnitude quake struck. Shaken but not hurt, they made their way back to Katmandu as quickly as possible to check in on family members and then to offer their assistance to others. Originally assigned the task of loading water jugs on trucks, they then volunteered and were enlisted for their translation skills, and headed out to some of the hardest hit villages with international relief workers. END_OF_DOCUMENT_TOKEN_TO_BE_REPLACED

END_OF_DOCUMENT_TOKEN_TO_BE_REPLACED

Over the past five years or so of supporting self-declared “networks” for change, I have evolved in my understanding of what is new when we call something a network, versus a coalition or collaborative or alliance.  On the surface, much can look the same, and one might also say that coalitions, collaboratives and alliances are simply different forms of networks.  Yes, and . . . I believe that what can make a big difference is when participants in a network (or an organization, for that matter) embrace new ways of seeing, thinking, and doing.  So let me propose that network approaches at their best call on us to lead with some of the following: END_OF_DOCUMENT_TOKEN_TO_BE_REPLACED

At the Interaction Institute for Social Change, we are in agreement with Professor john a. powell when he points to the need to consider and make fundamental structural changes in our country and communities for the causes of greater social justice and sustainability. END_OF_DOCUMENT_TOKEN_TO_BE_REPLACED

Our friend Jane Wei-Skillern recently co-wrote (along with Nora Silver and Eric Heitz) another valuable contribution to the growing “network building” body of literature, entitled “Cracking the Network Code: Four Principles for Grantmakers.”  This piece is part of Grantmakers for Effective Organizations’ learning initiative, Scaling What Works.  While the guide mainly addresses funders, it also has something for those outside of the philanthropic world.  Its core offering is a set of principles to guide what the authors call “the network mindset”: END_OF_DOCUMENT_TOKEN_TO_BE_REPLACED 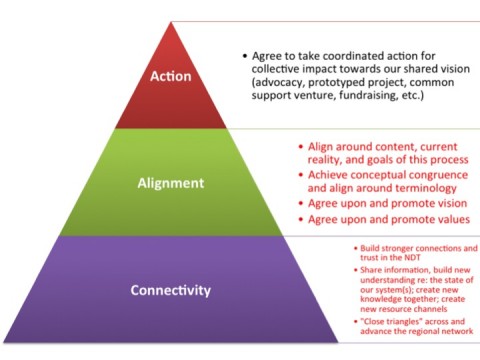 END_OF_DOCUMENT_TOKEN_TO_BE_REPLACED

As I prepare to do a couple of trainings for leadership in multi-stakeholder networks in the New England region (focus being on the skills of facilitation, process design, and managing decision-making), I intend to frame our conversations with some exploration of the differences between traditional organizational leadership and what is required to steward networks towards positive impact.  I begin with the presumption that network form and function are chosen strategically for the ability to accomplish something that could not be done at all or as well through other approaches.  Whether trying to develop a food system to eliminate food insecurity or change an educational system to yield more equitable opportunities and outcomes, the attraction to a network approach is likely due to a desire for some combination of the following: END_OF_DOCUMENT_TOKEN_TO_BE_REPLACED

Last week, I had the opportunity to work with a cross-sectoral group of emerging and established leaders from around southern Maine through the Institute for Civic Leadership, an initiative IISC had a hand in establishing some 18 years ago.  For the past six years I’ve offered three days of collaborative capacity building entitled “Facilitative Leadership and Teams” to each successive cohort, and it’s been interesting to see how the offering has evolved over time.  Throughout there has been an interest in looking at how to leverage what is now an incredible base of 500 + individuals who have been through this leadership program.  And so this year we dived formally into network building strategies. END_OF_DOCUMENT_TOKEN_TO_BE_REPLACED